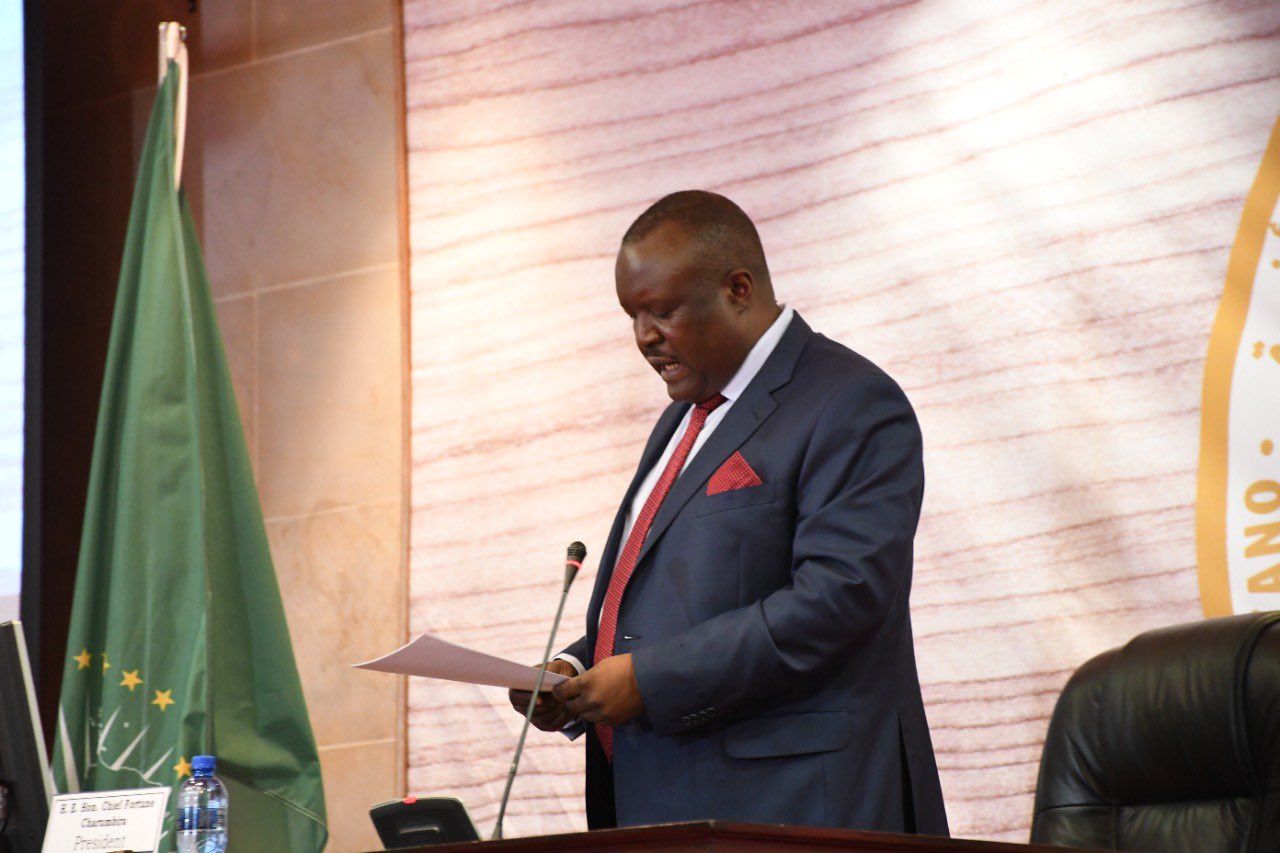 “As Zimbabwe heads to a watershed general election in 2023, the election of Chief Fortune Charumbira as the PAP President has come at an opportune time for ZANU-PF and an inopportune time for the people of Zimbabwe, writes Enocent Nemuramba.

The remarks made by the first respondent on 28 October 2017 on the occasion of the Annual Conference of the Council of Chiefs and on 13 January 2018, to the effect that traditional leaders have been supporting and must continue to support ZANU (PF) and its presidential candidate at the forthcoming 2018 elections be and is hereby declared to be in contravention of the Constitution of Zimbabwe”.

This was a finding made by Zimbabwe’s High Court against Chief Fortune Charumbira, who was recently elected as the new President of the Pan African Parliament (PAP). Zimbabwe’s Constitution requires traditional leaders, of which Charumbira is one, to be neutral on political preferences. Section 281 of the Constitution prohibits traditional leaders from taking up membership in political parties, participating in partisan politics, acting in a manner that advances any political cause or violating the fundamental rights and freedoms of any person.

Even after launching an unsuccessful appeal against the court’s ruling, Charumbira has, in open defiance of the court, refused to retract his remarks as ordered in the judgment.

For a man who has no regard for the rule of law or the principles of democratic governance, it is simply astonishing that Charumbira is now the principal official tasked with advancing one of PAP’s core functions – which is to “promote human rights, consolidate democratic institutions and culture, good governance and the rule of law…” in Africa.

While PAP has never been known as a torchbearer for the advancement of democratic norms and standards in Africa, the election of Charumbira removes any lingering hope that the institution will ever become a platform to give a voice to people living under oppressive governments across the continent.

In his home country Zimbabwe, where he is the head of an unelected body called the Zimbabwe Council of Chiefs that has representation in Parliament, Charumbira is a key cog in a ZANU-PF government system that has denied Zimbabweans their democratic rights for decades. Since his election as the head of the Council of Chiefs, ZANU-PF has always leaned on Charumbira and other traditional leaders to marshal voters, especially in rural areas, to vote for the party in violation of Zimbabwe’s electoral laws.

A review of the role of traditional leaders in Zimbabwean elections by Kubatana, a civil society organisation, concluded that “their role goes far beyond what is provided for in the Constitution of Zimbabwe [and] are clearly an appendage of the ruling ZANU PF without shame nor apology.”

With Charumbira as their political head, traditional chiefs have been known to either actively or passively influence electoral outcomes through sealing off space for opposition political actors, intimidating people who live under their jurisdictions and publicly expressing their allegiance to ZANU-PF. Their preferred modus operandi, in service of ZANU-PF, is enforcing the partisan distribution of food aid and farming inputs.

Acting as ZANU-PF’s political gatekeepers has brought with it hefty perks for traditional leaders, which range from salaries, all terrain cars, electricity connection and infrastructure upgrades to their homesteads. The incentives have become a patronage cost, at taxpayers’ expense, that ZANU-PF uses to keep traditional leaders in check.

For traditional leaders who have dared to deviate from the party line or question the status quo, the state’s response has been swift and brutal. When Chief Ndiweni of Ntabazinduna in Zimbabwe’s Matabeleland South province publicly stated his desire to be apolitical and not support President Emmerson Mnangagwa, he invited the wrath of the regimes’ enforcers in the ruling party. He has been made to face trumped-up charges of arson and violence in court and threatened with losing his chieftainship to his sibling.

In a different case, Chief Murinye of Masvingo was reprimanded by Mnangagwa’s Deputy, Constantino Chiwenga, after he dared to accuse ZANU-PF elites and Mnangagwa’s sons of looting gold ore from his area. Chiwenga later reminded all traditional leaders that they could be stripped of their chieftainship. Mnangagwa went even further and summoned 272 traditional leaders to Harare to read the riot act and warn them to stop all criticism of government. In all these brazen violations of the Constitution, Charumbira’s silence was as good as a tacit approval of the illegalities.

Will PAP look the other way?

As Zimbabwe heads to a watershed general election in 2023, the election of Charumbira as the PAP President has come at an opportune time for ZANU-PF and an inopportune time for the people of Zimbabwe. With a ZANU-PF regime functionary as the head of PAP, the question that most Zimbabweans are asking is whether the PAP will look the other way as human rights violations in Zimbabwe continue to escalate, as evidenced by the recent arraignment of opposition activists using trumped-up charges? Better yet, will all the legislators from Southern Africa and other parts of the continent, who voted for Charumbira, have the courage to call him out over the deteriorating political situation in Zimbabwe?

The election of Charumbira exposed everything that is wrong with the PAP and how senior office holders are selected. Based on his democratic credentials or lack thereof, Charumbira would have been roundly rejected by Africans had they been given an opportunity to elect the PAP president in an open election. That the PAP president is selected and nominated by politicians, who are only concerned with gaining regional supremacy over other African regions, further cemented the simple fact that PAP does not represent or act in the interests of Africans.

After spending a full year fighting to bag the PAP presidency through enforcement of the rotation system, the Southern African region shamed itself by nominating possibly the worst candidate from its ranks. The election of Charumbira was a smack in the face of millions of Zimbabweans who have endured years of oppression and impoverishment at the hands of a brutal regime. Charumbira is an appendage of that system and his only motivation is to retain the status quo to the detriment of democratic progress in Zimbabwe.

– Enocent Nemuramba is a PhD candidate in Public Administration at CPUT.