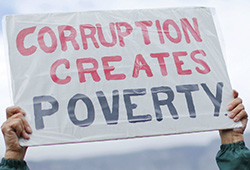 HURUNGWE Arts Productions is tackling corruption in Zimbabwe in a new play titled ‘Caged’.
The play warns Zimbabweans that if institutionalised corruption is not curtailed, future generations will continue to suffer.
‘Caged’ takes its audience to 2030, painting a bleak future, with corruption rampant.
“It’s a futuristic play showcasing the future of Zimbabwe based on the current policies the government is implementing,” producer Joel Zilala said.
“The story revolves around on industrial set-up, and brings up a number of issues affecting the smooth flow of business, which could have been avoided had the government made wiser decisions earlier.
“What we are saying is that the authorities need to act now to avoid the situation spiraling out of control.”
‘Caged’ highlights the plight of workers at a company run by executives who are busy squandering cash, living lavish lives while they are not paying their employees.
The play was written by Patrick Mahlasera of ‘Wedding Day’ fame, assisted by Getrude Vimbayi Munhamo.
It features a five-member cast which includes experts in the game, namely; Antony Tongai, Godwin Gutsa, Leo Magada, Zilala and Dalma Chiwereva.
Besides plays, corruption in Zimbabwe has also been tackled through music by artists such as Thomas Mapfumo with his track ‘Corruption’ as well as Hosia Chipanga amongst others.Advertisement