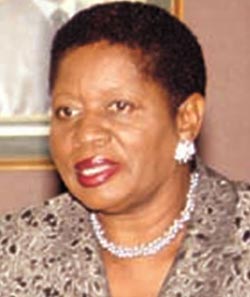 THE Reserve Bank of Zimbabwe (RBZ) is gathering input from stakeholders for inclusion in the first-half monetary policy statement which the central bank is expected to present before the end of January.
Former RBZ governor Dr Gideon Gono last presented the monetary policy in January 2013 and failed to make the second presentation as required by law because of disruptions brought about by the general election held in July last year.
The RBZ Act requires that the central bank presents the monetary policy statement bi-annually. “It is definitely on this month, before Jan 31,” an RBZ official told New Ziana here Wednesday.
The official, however, could not give a specific date for the presentation, which Acting RBZ Governor Dr Charity Dhliwayo will deliver.
New Ziana is reliably informed that the RBZ has already written to a number of stakeholders, including the Bankers Association of Zimbabwe, the Zimbabwe National Chamber of Commerce and the Confederation of Zimbabwe Industries, requesting their input.
The RBZ has the onerous task of restoring confidence, not only in itself as the country’s top bank, but in the financial sector as a whole.
With the financial sector still shaky because of the continued closure of banks, the central bank is expected to announce measures concerning the capitalisation of banks and ensuring stability of the financial sector.
Finance Minister Patrick Chinamasa said last December the existing capital thresholds for banks should remain unchanged “in order not to strain” the sector. A number of banks are already struggling to meet the US$120 million US dollar capital threshold.
The RBZ is also expected to attempt to address the liquidity crunch that is stalling economic development through introducing a number of measures that will boost confidence in the banking system such as the re-introduction of the interbank market.Advertisement