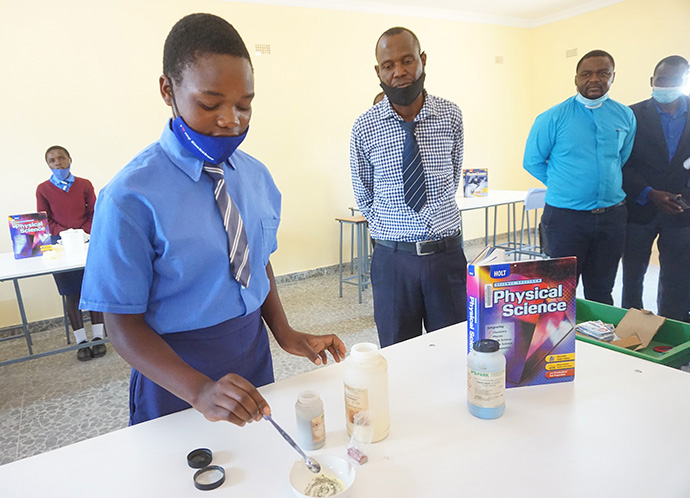 Dreams of becoming doctors and scientists are within reach for students at United Methodist Hanwa Secondary School thanks to a new state-of-the-art science laboratory.

Zimbabwe Volunteers in Mission helped fund the construction of a spacious science lab and new library at the Hanwa Mission school. In addition, numerous solar components were added to several buildings. The work was valued at $114,878 (U.S.).

“Science is the thing, and Hanwa is walking the path that the government has set,” he said.

Fadzai Leania Katemauswa, a Form 4 student, said not having a lab deprived students of practical knowledge.

“This impacted negatively on our performance on Science Paper 3 (exams), which needed us to do some experiments. Many students ended up concentrating on arts subjects instead of sciences because they considered it a waste of time and resources.

“Careers like being a medical doctor, a pharmacist or a scientist were just dreams; hence, many talents went untapped,” Katemauswa said.

Thrilled with the new laboratory, she envisioned her possible future.

“It will transform us. Imagine what I would feel,” she asked, “if I acquire a doctorate degree after acquiring the primary qualification from Hanwa? I will feel good when people start calling me ‘Dr. Fadzai Katemauswa.’”

“Development is to look around the environment and try to empower and raise areas that are still in need. Hanwa (has) an assured future,” he said.

According to Charles Eric Moore Jr., Zimbabwe Volunteers in Mission team leader, the building of the science laboratory was part of the group’s 2020 initiative, which also included a library for the secondary school and a new parsonage at the mission.

Planning for the initiative began during the team’s last journey in February 2019. A July 2020 visit was canceled due to Covid-19 travel restrictions.

“This did not impede us from raising the funds necessary for construction,” Moore said, adding that the group continues to support the long-term vision for a boarding school at the Hanwa Mission.

“Some of the thinking around building the science laboratory is related to the current strategy of creating a major farming initiative in partnership with the School of Agriculture at Africa University. The science lab will provide educational resources for agricultural research in addition to the traditional science focus by students,” he said.

The Rev. Henry Luckson Chareka, superintendent for the Murehwa Uzumba Maramba Pfungwe District, said he initiated the idea of turning Hanwa into a science school. “ZIMVIM nailed it by having a science laboratory. It is an assurance for a bright future.”

Expressing gratitude to the team, Chareka said, “You have done us proud as you have been diligently transforming Hanwa since 2016. You have come in as angels of hope, transforming a farming area into a great institution and center of learning excellence.

“At this pace, I foresee Hanwa becoming a boarding school in no time, growing big and adding value to the Macheke area. Who knows? It can be a university in waiting.”

The Rev. Future Sibanda, pastor-in-charge and chaplain for Hanwa Mission, said the children were using an under-resourced, makeshift science laboratory with poor equipment.

“This made it difficult for practicals to be effectively conducted and to adequately prepare (students) for their examinations and improve their pass rate.

“The laboratory is of high standard,” he added. “I think it is the best in the district. The future of science subjects at Hanwa School is now certainly bright and promising. Having this kind of infrastructure and a well-stocked library wing is certainly a good investment for the future of the school and the children.”

“Effective teaching and learning science involves seeing, handling and manipulating real objects and materials. … The constructed laboratory will help students to retain knowledge and have lifelong learning skill if they see and participate during experiments being performed,” she said.

“It is said, ‘I see or hear, I forget, but if I do, I remember,’” he said. “We did not have adequate apparatus, chemicals, safety clothes and equipment to carry out experiments. Most of the practical work was done theoretically to the disadvantage of the learners, especially in light of the new curriculum.

“The new laboratory has addressed all these challenges. Learners do practical work and meet the requirements for Science Paper 3, as well as consolidate concepts learned during the theory lessons.”

“I am a qualified laboratory technician,” he said, “and I know the importance of a science laboratory. As parents, we played a pivotal role in making sure that the laboratory was constructed without any hindrance from our side.”

“God gave us a double portion,” he added, “by giving us one of the best laboratories in this district and a library for learners to research,” he said.

“Today we are proud of this achievement. The availability of the laboratory is to our advantage because it is our children who are benefiting. When they become doctors, they will look after us and render the services we would need.

“On behalf of everyone, I say ‘thank you.’ May God continue to bless you, give you wisdom and do more for Hanwa.”