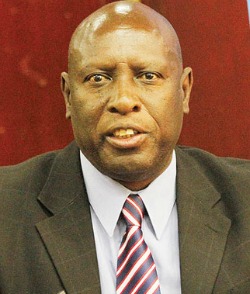 DEPUTY Finance Minister Samuel Undenge said Friday a new economic model was emerging in Zimbabwe driven mainly by small-scale players in key sectors such as farming and mining.
Speaking at a post-budget breakfast meeting, Undenge said small-scale miners and farmers had played an increasingly bigger role in the economy in recent years, hence the need to acknowledge the changing dynamics.
“It is true that we are now having a new economy. In the past we had 2,000 tobacco farmers but now we have 90,000 farmers and much of the tobacco production is done by small-scale farmers. So a new economic model is in the making and we need to recognize and support it,” he said.
Zimbabwe’s economy is principally driven by agriculture and mining with tobacco the major agricultural export earner while gold is the leading mineral export earner.
Undenge said the new economic mode sought to decriminalize operations of small-scale gold miners so that they sell their gold through formal channels and contribute to national economic growth.
What was needed, the minister said, was for strict enforcement of environmental laws to ensure the small-scale miners do not degrade the environment.
While presenting the 2014 national budget Thursday, Finance Minister Patrick Chinamasa revealed that he had secured a 100 million U.S. dollars line of credit to support artisanal miners.
He said the money would be primarily used to purchase basic equipment for artisanal miners.
Chinamasa also said last week that the old economy was dead and that a new one was emerging based on the activities of small-scale players in key sectors of the economy.
Small-scale miners once contributed 50 percent to total gold produced in the country in 2004 but this had declined to 20 percent due to viability and operational challenges.
The country’s sole gold refinery resumed operations this week after five years of closure and the development was expected to significantly improve operations in the gold industry.
With government banning raw gold exports with effect from next month, all small-scale miners would have no option but to sell their gold to state-owned Fidelity Printers.
In the budget, Chinamasa reduced the royalty paid by small- scale miners from 7 percent to 3 percent to boost their operations.Advertisement