NEWLY appointed Minister of Youth, Sports and Arts, Kirsty Coventry has revealed she was pregnant and expecting a child May next year with her husband Tyrone Seward.

The swimming legend, who turns 35 this Sunday 16 September, made the announcement to her followers on her official Twitter account on Saturday.

“We are going to be Parents in May 2019! What a week, what a blessing!” Coventry said in the post which was accompanied by a picture of her with her husband.

Coventry and her husband got married in January, 2013, with the latter paying the customary lobola to the Coventrys for the swimming icon, who has earlier revealed that she wanted a traditional marriage.

After the traditional marriage, the two lovebirds later exchanged wedding vows during a private ceremony held in Harare in August 2013.

The pregnancy announcement followed an eventful week in the life of the swimming legend in which she was appointed minister, becoming the first ever Zimbabwean professional sportsperson to hold the cabinet post.

Until the announcement, not so much had been known to the public about Coventry’s love life. 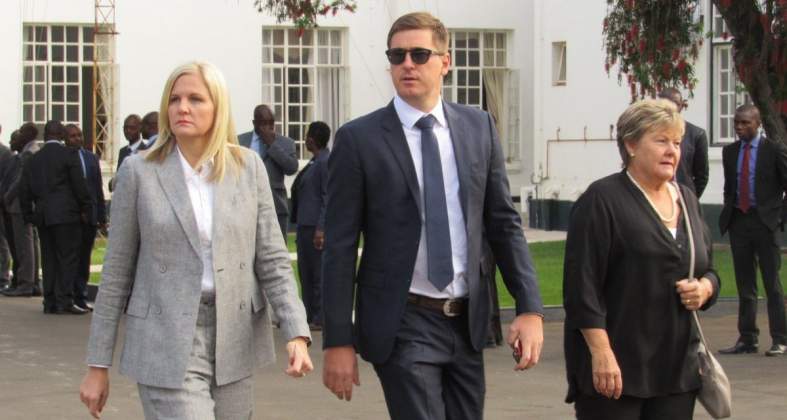 Coventry with husband Tyronne Seward during swearing in at State House

Throughout her historic career as Zimbabwe’s most-decorated athlete, Coventry collected 7 Olympic medals, including back-to-back 200m backstroke gold medals at the 2004 and 2008 Games.

She also was the mainstay on the World Championships scene, competing at every edition from 2000 through 2016.

Since retiring from competitive swimming after the 2016 Rio Olympics, Coventry has been active on the administration side of sports internationally.

In February this year, Coventry was appointed Chairperson of the IOC Athletes’ Commission and has previously served on the Foundation Board of the World Anti-Doping Agency (WADA), as well as a member of the WADA Athletic Committee.

She is actively serving on the Coordination Committee for the Tokyo 2020 Games and is a member of the Olympic Solidarity organisation.

In April of this year, she was named by the IOC as a member of the Evaluation Committee for the 4th Summer Youth Olympic Games.

In 2015, Coventry kick-started her own ‘Kirsty Coventry Academy’ in Zimbabwe with the goal of reducing drowning deaths within her home nation.