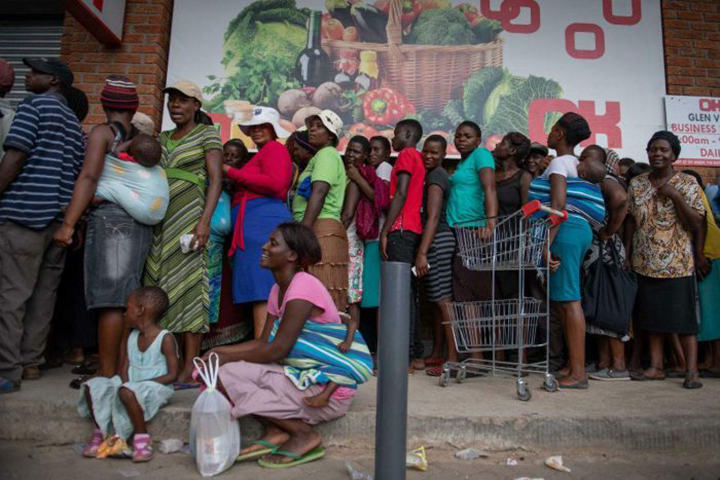 When Zimbabwean President Emmerson Mnangagwa appointed a comparatively youthful, Cambridge-trained economist as finance minister in September, he gave him an almost impossible task: repay billions of dollars in debt and ignite a stagnating economy.

Mthuli Ncube, 55, quickly moved to impose a two percent tax on electronic transactions in a bid to raise $700 million a year, mainly from the dominant informal sector. The impact was immediate — inflation surged and people were forced to stand in lines for everything from fuel to consumer goods, evoking memories of the economic collapse in 2008 when Robert Mugabe was president. Mnangagwa promptly said the measure would be reconsidered.

“They put us on the streets and made us hustle for money when they killed the economy,” said Nick Wasara, a 25-year-old fruit and vegetable seller in Harare, the capital. “Now every plan they have to fix Mugabe’s mess puts more pain on us. It’s pain on top of pain. That tax thing was too much, but you know the next plan will be too much again. We only suffer.”

While Mnangagwa’s rowback may have been a political necessity, it leaves Zimbabwe with the same problem it has had for a decade — how to raise money to pay arrears to lenders so it can restart the aid programs needed to breathe life into the economy. Under Mugabe sub-Saharan Africa’s second-biggest industrial sector collapsed and a quarter of the population emigrated out of economic necessity.

Ncube’s tax triggered inflation as businesses, both formal and informal, insisted on cash when there isn’t any. The result, in a country that abandoned its own currency in favor of the greenback in 2009, is that electronic dollars trade at a discount to hard cash. The government’s so-called bond notes, which it insists have the same value as dollars, are worth even less.

According to the Zim Bollar Index, a Twitter account that tracks the exchange rates, 3.25 bond notes are needed to buy one dollar in cash on the black market, while a vendor will insist on $3.35 in electronic dollars for every paper unit. Official inflation, at 5.4 percent, is accelerating at its fastest pace in eight years.

Over 98 percent of payments are made by card or mobile phone, according to the Finance Ministry — mainly because cash notes are hard to find. Banks ration cash from counters and most automated teller machines have been empty for months.

“The market has said these currencies aren’t at par, and I don’t want to argue with the market,” Ncube said in a speech in London last month, when he called bond notes an experiment that will have to be scrapped at some stage.

For more on the impact of the transaction tax click here

Ncube represents a break with the past as Mnangagwa, a 76-year-old who was Mugabe’s right-hand man for half a century before falling out with him last year, has vowed to fix the economy.

He’s unlikely to get much public support.

“You can see Porsches on the streets, but for us, the people, we must hustle for a dollar here, a dollar there,” said Wasara, a high-school graduate.

Ncube is an academic and former vice president of the African Development Bank with few political connections. He replaced Patrick Chinamasa, a veteran politician who repeatedly missed deadlines to repay Zimbabwe’s debt and oversaw national finances during a period when the government couldn’t pay its teachers and soldiers on time.

Last month, Ncube said Zimbabwe will clear $2 billion in arrears to the AfDB within a year in a bid to restart aid programs. Still, the country’s total external debt is $7.4 billion, $5.6 billion of it in arrears. Its budget deficit for the first nine months of the year was $2.5 billion, compared with a target of $715 million.

There is “debilitating distrust in the government and the country’s financial system,” Jee-A van der Linde, an economist at NKC African Economics in Paarl, South Africa, said. “Dollar hoarding and panic buying are likely to persist as long as quasi currency instruments continue to lose value against the dollar.”

AfDB President, Akinwumi Adesina, told journalists in Johannesburg this week that while Zimbabwe is making progress, its economy and relations with lenders are still a way from being repaired.

Ncube’s choice is stark: repay arrears in the hope of winning aid, or pay for essential imports such as the $100 million a month needed to forestall shortages of fuel.

The signs aren’t good. The coal supplier to the main thermal power plant has been placed under administration and one of the biggest gold miners has halted production at three operations because of a foreign-exchange shortage.

While Mnangagwa’s decisions to trim the cabinet and pick a respected finance minister are good signs, Van der Linde isn’t optimistic that Ncube can engineer a quick economic turnaround.

“The odds are stacked against him, that’s for sure,” he said.