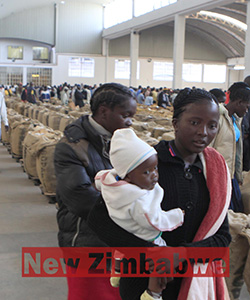 NEW measures allowing undercapitalized local tobacco merchants to buy the cash crop could prejudice smallholder farmers funding their own crop and further widen the price gap between the contract and farmer-funded crop, industry experts have said.
After the 2015 marketing season opened with subdued prices and protests from farmers who feel cheated, industry sources said the price gap between contract sales and auction sales is set to become starker after the Reserve Bank of Zimbabwe gave local tobacco merchants the green light to source funds on the local market to buy the cash crop.
The announcement came as foreign merchants raised $824 million offshore to purchase the 2014/15 crop, while local merchants continue to struggle to raise international funding.
Industry sources however, said the new measures are likely going to short-change smallholder farmers and reward contract farmers due to the high cost of funding in the domestic economy.
Last year, contract farmers were paid up to $6,15 per kg for the same quality of the crop that fetched $4,99 at the auction floors.
“Due to the liquidity challenges on the market, local buyers are likely to short-change smallholder farmers,” a tobacco industry player said.
“The merchants also do not enjoy economies of scale which means that they are likely going to either manipulate the system or offer low prices to farmers who bring the crop to the auctions.”
The central bank last Wednesday announced that tobacco finance accommodation for merchants who fail to access offshore finance shall be limited to a maximum of $1 million per tobacco merchant.
Pricing of tobacco for contract farmers is currently based on a grade-price index using the Tobacco Industry and Marketing Board classification system which prices should cover production costs and include a profit margin for the grower.
In the event that the agreed price is lower than the price paid for the same crop at the auction floors, the grower shall be paid the higher price prevailing at the auction floors at the time.
“In light of the need to promote equity and in the interest of enhancing competition at the tobacco auction floors, the Reserve Bank has seen it necessary to accommodate deserving tobacco merchants, by allowing them to buy green leaf tobacco using funds sourced from the local market, RBZ governor John Mangudya said in a statement.Advertisement

“Therefore, tobacco merchants who would have failed to secure offshore lines of credit, shall be accommodated through a special dispensation granted by Exchange Control, on a submission and approval basis, to access local finance to purchase the crop for the current marketing season.”
This year Zimbabwe projects lower output at around 195 million kg from 216 million kg last year, which earned $684 million.