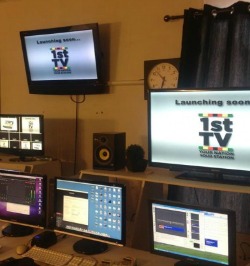 DAYS after the country’s first ever independent TV station began broadcasting, its executive producer hasn’t had much sleep – but he sounds elated.
“The response has been overwhelmingly positive,” Andrew Chadwick said, speaking from Johannesburg where 1st TV has had to set up base to get round Zimbabwe’s press restrictions. “People are saying, ‘You’re doing a great job, even Zanu PF officials are watching.”
1st TV began broadcasting on Friday, less than two weeks before Zimbabwe’s elections. The fact that millions of Zimbabweans had just lost the South African TV signal they had been illegally accessing gave 1st TV a ready-made, waiting audience.
President Robert Mugabe, 89, has maintained an iron grip on Zimbabwe’s airwaves for 33 years, his ZBC TV and radio stations churning out a steady stream of propaganda.
The new station, which broadcasts for four hours each evening, can be watched for free using local satellite dishes.
“The market is insatiable,” says Chadwick.
He insists 1st TV is not an opposition mouthpiece, even though he has worked for the Movement for Democratic Change and its leader, Morgan Tsvangirai, who will stand against Mugabe for the third time in next week’s polls.
“Zimbabweans … will turn away from us in droves if they see we are a mirror image of the state broadcaster, if we do for the MDC what they do for Zanu PF.”
Mugabe has vowed to “cripple” the station. The regime had dealt with three foreign-funded radio stations beaming news into Zimbabwe. Chinese experts helped jam signals, while police have confiscated radio sets.
Last week one commentator quipped that if police started confiscating the Wiztech decoders which read 1st TV’s signal, “it’d mean a win for the MDC”.
A Tsvangirai win is far from guaranteed. Rights groups claim that Mugabe has rigging plans ready, aided by a compliant electoral commission.
The MDC’s Tendai Biti, who is finance minister in the coalition government, alleged last week that an Israeli firm contracted to work with the registrar general on the voters’ roll had helped generate four different versions that could be used to manipulate results.
And last weekend, elections chief Rita Makarau announced that eight million ballot papers will be distributed “so that we do not run short”. There are 6.2 million registered voters.Advertisement

The opposition still believes Tsvangirai won the 2008 poll outright and that during the five weeks between polling and the announcement of results, ballot boxes were stuffed to narrow his lead over Mugabe, necessitating a run-off. Tsvangirai boycotted this vote after 200 MDC supporters were killed.
Tsvangirai appears buoyed by huge turnouts at his rallies. But many may not be on the voters’ roll: the Harare-based Research and Advocacy Unit claims that two million potential voters under the age of 30 have been unable to register.
“I think it’s one of the most uncertain elections we’ve been in,” said Chadwick.