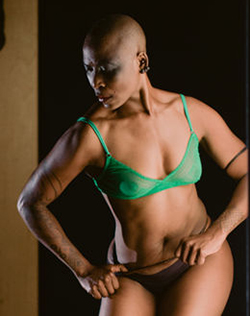 AS part of the 2017 edition of its acclaimed Crossing the Line Festival, the French Institute Alliance Française (FIAF), New York’s premiere French cultural centre, will present the US Premiere of Nora Chipaumire’s #PUNK.
Informed by 1970s independent music, Americana, and her own formative years in Zimbabwe in the 70-90’s, Chipaumire’s punk perspective on the future paints a riotous sonic and visual landscape with voice, dance, installation, and performance.
#PUNK is the first part of a triptych of Chipaumire works entitled #PUNK 100% POP*NIGGA. The body of work confronts and celebrates the body and aesthetic of three iconic women, each with her own sonic ideology: Patti Smith and punk in #PUNK; Grace Jones and pop in 100% POP; and Rit Nzele and rumba in *NIGGA.
In her iconic song Rock ‘n’ Roll Nigger, Patti Smith declares, “I haven’t f**ked much with the past, but I f**k plenty with the future.” Echoing Smith, Chipaumire declares herself to be an “African nigger”-the sort who “f**ks with the past, and f**ks even harder with the present/future.”
“I’m looking at the idea of what happens when you’re absolutely free and there is no container, there is no frame, and you rewrite the laws for yourself. That’s what this work is about,” Chipaumire explained in a recent interview with CNN.
“The physical act of being present, in front of somebody-you look into my eyes, I’m looking into yours, you see my body sweat, you know I am living and breathing. It’s something you cannot actually replace. It’s really a sacred moment.”
The show is set for Thursday, September 14 and Friday, September 15, in FIAF’s Tinker Auditorium.
On September 15, Chipaumire will participate in a post-performance conversation with Faustin Linyekula, moderated by Ralph Lemon.
# PUNK was commissioned by Lincoln Center for the Performing Arts with the support of Miami Light Project, ICA Live Art Festival (Cape Town), Crossing the Line Festival / French Institute Alliance Française and company nora chipaumire.
About Nora ChipaumireAdvertisement

Originally from Mutare, Zimbabwe, Nora Chipaumire is a choreographer, performer, and director whose work directly confronts and challenges stereotypes of Africa and the black performing body.
Chipaumire most recently received the 2016 Trisha Mckenzie Memorial Award for her impact on the dance community in Zimbabwe. She was also awarded a 2016 Foundation for Contemporary Arts grant and a 2015 Doris Duke Artist award.
She was a Hodder Fellow at Princeton University in 2014-2015, a 2012 Alpert Award in the Arts recipient, and a 2011 United States Artist Ford Fellow.
Chipaumire is a three-time New York Dance and Performance (aka “Bessie”) Awardee: in 2008 for her dance-theatre work Chimurenga, in 2007 for her body of work with Urban Bush Women, and in 2014 for the revival of her solo Dark Swan. She was also a MANCC Choreographic Fellow in 2007-2008, 2009, and 2015.
Her 2016 work, portrait of myself as my father, was commissioned by Peak Performances @ Montclair State University, co-commissioned by MDC Live Arts in partnership with Miami Light Project, Georgia Institute of Technology, 651 ARTS, Dance Center of Columbia College, and company nora chipaumire.
It is the companion piece to rite riot (2013), a solo rendering of The Rite of Spring, commissioned by FIAF and presented at the Crossing the Line Festival in New York City and Les Subsistances in France.
Now based in Brooklyn, she is a graduate of the University of Zimbabwe’s School of Law and holds a M.A. in Dance and M.F.A. in Choreography & Performance from Mills College.
She has studied dance in Africa, Cuba, Jamaica, and the US, and has performed internationally in France, Italy, Japan, Senegal, and Zimbabwe, among others.
Her work has been reviewed by The New York Times, The New Yorker, Le Monde, Johannesburg Sunday Times, and The Chicago Tribune. Chipaumire made her debut as film director in 2016 with the short film Afro Promo #1 King Lady, commissioned by Dance for Film on Location at Montclair State University. Chipaumire is also a 2017 ICA fellow at the University of Cape Town, South Africa.