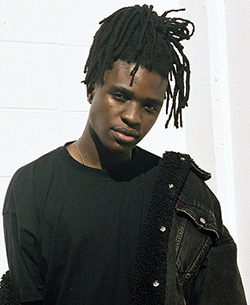 AUCKLAND: Twenty-one-year-old rapper-producer TAPZ relocated from Zimbabwe to Auckland, New Zealand, when he was only ten.
The move was prompted by his parents, who wanted to leave their war-torn area of the country and raise their son in safety. In Auckland, a young TAPZ immersed himself in the local music scene where he connected with industry peers.
These relationships would eventually open doors that led him to write and produce songs for Vic Mensa, Wynter Gordon and R&B newcomer 6lack. In 2015, TAPZ was also featured on Australian electro hip-hop duo Hermitude’s massively successful single “The Buzz,” which earned him his first taste of mainstream visibility.
The following year the rapper solidified his presence as a solo artist with the release of his Ricky Reed-produced single “KILLA.”
The entrancing 808 and synth-forward track perfectly aligned with the trap meets pop zeitgeist of today, making it an instant viral hit. Additional support from Zane Lowe, who premiered the song, helped the young artist secure tour spots in Australia and New Zealand with G-Eazy, A$AP Ferg, Danny Brown, Tinie Tempah and Hermitude.
Now TAPZ is following up a breakthrough 2016 with a forthcoming EP set to drop sometime this spring. The project’s lead single, “Run Don’t Run,” is a introspective reflection on the realities that informed TAPZ’s childhood and set him on the journey from Wedza, Zimbabwe to Auckland.
“They left everything to give me everything,” says the rapper of his immigrant parents.
“‘Run Don’t Run’ is a note to self; a reminder. In the context of my vision, I must leave everything to give everything, The video is a visual representation of my journey to find fearlessness in a system where we are taught to run and act without question,” he shared.
Advertisement