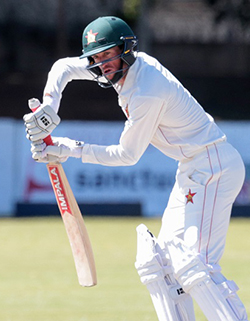 BULAWAYO: New Zealand cleaned up Zimbabwe’s lower order after lunch on the final day of the second test to dismiss the hosts for 132 and seal a 254-run win on Wednesday, clinching the two-match series 2-0.
Zimbabwe lost its final five wickets in the space of 7.4 overs for just two runs, with spinners Ish Sodhi (3-19) and Martin Guptill (3-11) doing the damage.
New Zealand set Zimbabwe a victory target of 387 after declaring its second innings on 166-2.
Zimbabwe resumed Wednesday on 58-3, lost first-innings century-maker Craig Ervine (27) and nightwatchman Donald Tiripano (22) before lunch, and then collapsed in the second session as the wicket started to turn.
Sean Williams (11), Prince Masvaure (11), Peter Moor (1), Graeme Cremer (1) and Michael Chinouya (0) were the last men out.
New Zealand, who won the first test by an innings and 117 runs also at the Queens Sports club in Bulawayo, now move across the border to play South Africa.
“Going to South Africa is going to be a lot harder,” seamer Neil Wagner said. “But if we keep doing this we will give ourselves a big shot.”
Wagner was chosen as man of the series with his 11 wickets over the two tests.
A first-innings total of 582-4 declared, featuring three centuries, was the bedrock of the Kiwis’ win. Kane Williamson was one of the century-makers, scoring 113 to become at age 26 the youngest player to make three figures against all nine test-playing nations, and was named man of the match.
“The team is more important,” Williamson said. “When personal records come, it’s nice. I’m more excited about the team, especially Rossy (Ross Taylor, who scored 124). He is batting unbelievably at the moment. The guys are playing good cricket.”
Zimbabwe initially launched a spirited chase in pursuit of the winning target of 387, but lost its way as the New Zealand spinners tightened the screws on a wicket that spun sharply later in the test.
“We gave a good fight,” said Cremer, Zimbabwe’s captain. “Credit to the guys who stuck in. We knew it was always going to be difficult to bowl on this wicket … it’s a Bulawayo wicket.
“Credit to New Zealand for taking 20 wickets.”Advertisement