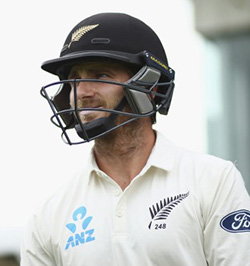 NEW Zealand Cricket are eyeing the tense situation in Zimbabwe’s capital, Harare, where riot police are on the prowl, less than two weeks before the Black Caps arrive there.
The Black Caps are scheduled to fly out on Monday for a week-long training camp in Pretoria, South Africa, before arriving in Harare on July 20 for a three-day warm up game ahead of two tests in Bulawayo.
It will be captain Kane Williamson’s first tour in charge of the test team.
Business in Harare and other cities ground to a halt on Wednesday as Zimbabweans stayed home to protest the government’s handling of the deteriorating economy, in the latest sign of growing popular discontent with President Robert Mugabe’s 36-year rule.
In two poor townships in the capital, residents barricaded roads with rocks as they engaged in running battles with the police, who responded with tear gas.
In central Harare, scores of police officers in riot gear were guarding Africa Unity Square, a popular gathering place, and other strategic spots.
Much of the business district remained deserted, with most stores and banks choosing to close for the day, it was reported.
An NZC spokesman said it was keeping a close eye on developments in Zimbabwe, and would continue to do so on a daily basis.
“There are no plans to change anything yet. The team will fly to Pretoria and we will keep monitoring the situation.”
The Black Caps toured Zimbabwe a year ago for a short limited overs series, without incident.
The Ministry of Foreign Affairs and Trade (MFAT) assessed “some risk” for New Zealanders.
“There is some risk to your security in Zimbabwe due to underlying political tension and high levels of crime and we advise a high degree of caution,’ it said on MFAT’s website.
“The situation in Zimbabwe is mostly calm but some reports of politically-motivated intimidation and violence continue. New Zealanders should be vigilant and maintain a high level of personal security awareness in Zimbabwe.”
MFAT recommended avoiding all demonstrations, rallies and large public gatherings, “as police and security forces have used force to suppress demonstrations and any perceived opposition to the Government”.
In Harare the stay-away-day, as it was called, followed weeks of mounting popular anger as the government has struggled to pay civil servants, who are the biggest work force in Zimbabwe’s formal economy, the New York Times reported.Advertisement

On Wednesday, many civil servants, who have not been paid their June salaries, reported to work after being threatened with dismissal.
But most public school teachers and government health care workers, who began striking a day earlier, did not show up for work.
Police officers, members of the military and prison workers are the only government employees who have collected their June salaries. But in an indication of the government’s strained finances, they received their pay two weeks late.
Access to social media like WhatsApp and Twitter was cut off for several hours on Wednesday morning.
The government agency that oversees the country’s cellphone providers issued a warning against what it described as “gross irresponsible use of social media and telecommunication services.”