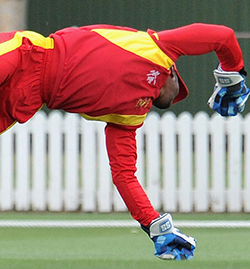 MARTIN Guptill joined the list of New Zealand batsmen with hundreds to their name in recent weeks, but it was Zimbabwe who enjoyed the better of proceedings in Lincoln before rain arrived to wipe out the contest.
New Zealand struggled to 157 for 7 after 30.1 overs when the weather closed in moments after Guptill’s 83-balls innings was ended by Sikandar Raza’s first ball.
The next highest score was Ross Taylor’s 11 as Zimbabwe’s seamers made early inroads on an overcast day.
Taylor had said in the lead-in to the final warm-up period that New Zealand wished that they could just start the World Cup proper after their successful preparation period and the batting display, with the exception of Guptill, suggested their hearts were not fully in the match.
However, credit must also go to Zimbabwe and this will have been a confidence-boosting display even though their batting could not be tested.
Tinashe Panyangara made the first breakthrough in the opening over when Brendon McCullum, having struck two boundaries, chipped a return catch and he added the in-form Kane Williamson who drove a catch to cover.
Guptill was scoring freely at the other end and reached his fifty with a six from 34 balls but by then Taylor had also departed to an edge, giving captain Elton Chigumbura his first wicket.
Chigumbura then removed Corey Anderson courtesy of a fine catch by Tafadzwa Kamungozi at mid-off.
Tom Latham, who is unlikely to feature in New Zealand’s first XI, had the chance for an extended period in the middle but after the first break for rain he fell to the legspin of Kamungozi.
Daniel Vettori was also caught behind shortly before Guptill raised his hundred from 85 balls and then swiftly cut to point, the final action of the day.
New Zealand’s last warm-up match is against South Africa on Wednesday while Zimbabwe play Sri Lanka.