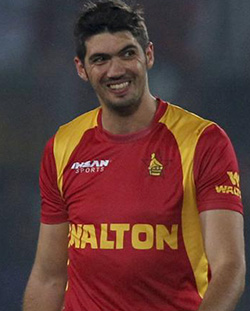 AFTER terming his selection as captain of the Zimbabwe team as a “surprise”, all-rounder Graeme Cremer is bullish about his team putting up a good show in the upcoming limited-overs series against India.
“Obviously this Indian team is a young unit under M.S. Dhoni. So we don’t know a lot about most of the guys, but we just need to make sure we do our process right and adapt to their players as quickly as possible,” added the 29-year-old.
Talking about him being at the helm, Cremer said: “It was a surprise.
“I had heard some news that my name was doing the rounds for captaincy, but never knew it was going to happen. My family is proud, and happy.”
With himself being a leg-spinner, Cremer said it can be tough as a bowler to lead a side.
“But I am confident of making good decisions that will benefit the team as well as do my job as a bowler. I do not have any regrets (when I announced my decision to retire in 2013).
“I feel I am a better player now. I am happy to be back playing, and to be given the opportunity to lead the side.”
Meanwhile, sacked skipper Hamilton Masakadza expressed his disappointment.
“I had a meeting with chairman of the board, MD and head of cricket committee,” he said.
“They just informed me I was not the captain anymore and that the board had made the decision.
“I told them how disappointed I was and that I would accept it as it had come from the board.”Advertisement