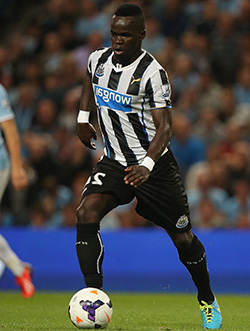 ZIMBABWEAN Nkosiphile Mpofu was left seething after her married lover, Newcastle United star Cheick Tiote, ignored her, opting to go to his native Ivory Coast to marry a second wife.
33-year-old Mpofu, better known as Nikki Mpofu, has a one-year old child with Tiote.
A close friend told NewZimbabwe.com “During family talks (this week) Tiote claimed he could not marry Nikki as this is illegal in the UK.
“Nikki refused to become Muslim and that’s why he didn’t marry her although he repeatedly asked her to convert. She wanted to enjoy the lifestyle without being Muslim.”
The 28-year-old Ivorian, who earns around £45,000 a week at St James’ Park, lives with his first wife Madeh and their two children in a £1.5 million mansion in Ponteland near Newcastle.
His agent confirmed that Tiote married second wife, Doukrou Laeticia, shortly before the start of  the new Premier League season. The wedding took place in Abidjan.
“I can say that he did get married and that it is his second marriage. This is nothing unusual. He is a Muslim,” his agent Jean Musampa told the Newcastle Evening Chronicle.