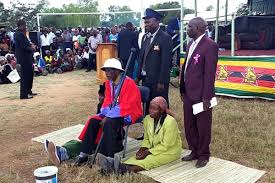 Chief Bere during his installation in 2019
Spread This News

CHIEF Bere, whose chieftaincy bounced back in 2019 after the intervention of President Emmerson Mnangagwa, has died.

Bere, born Phineas Tafirei, will be laid to rest tomorrow (December 22) at his rural home near Bhuka shopping centre, Masvingo.

This was confirmed by his spokesperson, David Masomere but declined to shed more light on when the chief demised.

“Yes the Chief has passed on, we will be laying him to rest tomorrow. As for when he died, I can’t say that because it is against our culture,” said Masomere.

Sources told NewZimbabwe.com that the traditional leader died last week but cause of death is yet to be known although it has been indicated that he was battling some ailments due to old age.

Since the reintroduction of the Bere Chieftaincy, the Bere clansmen have been locked in a fierce fight with Chief Fortune Charumbira’s people over boundary issues.

Emergence of the Bere chieftainship which is closely linked to 96 years after it’s demise, came as a threat to Charumbira who lost a significant portion of his jurisdiction.

Clansmen from the two clans have been fighting and their fights have extended to funerals where they clash to deliver speeches.