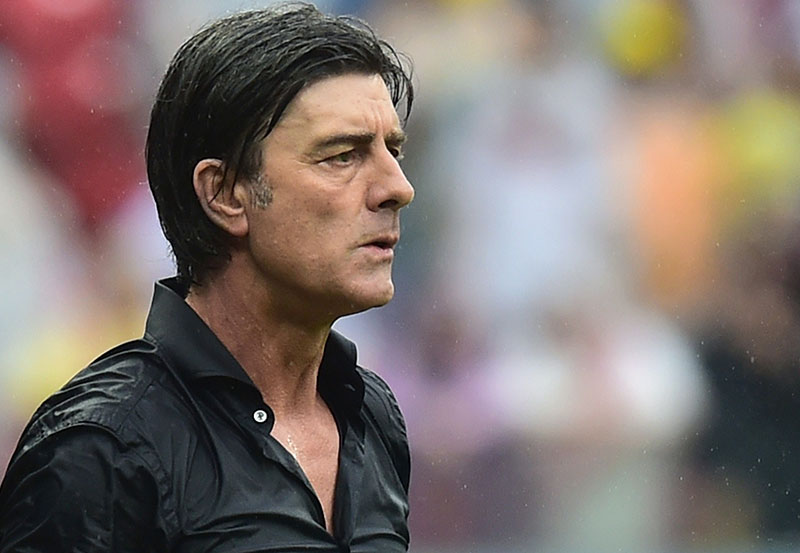 Even with his reputation battered by the worst year in German football history and a disastrous World Cup exit, Joachim Loew remains optimistic about Germany’s future in 2019.

A 2-2 draw with the Netherlands on Monday, when both Dutch goals came in the final six minutes, plus Thursday’s 3-0 win over Russia do not paper over the cracks of a horrendous year for Loew.

“It was like a bad movie,” admitted Thomas Mueller, who was making his 100th international appearance.

Germany won just four of their 13 games in 2018, scoring only 14 goals, yet Loew remains optimistic.

“I have a good feeling going into the winter break,” he said despite his team throwing away a 2-0 lead in Gelsenkirchen.

“We are well set up for next year with these players, that gives you a lot of courage.”

The reason for his optimism is his youthful forwards Leroy Sane, Timo Werner and Serge Gnabry, who have scored four of Germany’s last five goals.

Despite Loew’s brave face, the Germans have plummeted from first in the FIFA rankings to a sobering 14th in five months.

Never before in German FA (DFB) history has the senior team exited a World Cup at the group stages. Loew’s side also suffered a record six defeats in a calendar year.

The indignation of Nations League regelation from the ‘A’ division was confirmed long before kick-off against the Dutch, which affected the gate.

Only 42,186 fans – two-thirds of the stadium’s capacity – watched the draw and the viewing figures of 8.5 million were relatively low.

“One cannot expect the fans to run to us after a year like this,” said Loew.

In a bid to win back disgruntled fans, the DFB launched a charm offensive.

A public training session was held in Berlin last month and children asked the questions at a press conference, held in a Leipzig school, before the win over Russia.

However, the World Cup debacle, Mesut Ozil’s dramatic resignation from the German team – citing “racism and disrespect” – and a flood of defeats left many fans wanting Loew to resign.

Loew, who has a contract until 2022, has been given a relatively easy ride.

“We’ve gone from Number One in the world to being happy about a close win over Peru and success against a Russian ‘B’ team,” commented German magazine Der Spiegel under the headline: ‘How Loew can you go?’

“This is a sobering record and you can also say, disastrous.

“However, the coach remains and will not be significantly challenged.

“There is no real debate about Joachim Loew. And you have to ask yourself: why not?”

The answer is that after 12 successful years, when reached the semi-finals of every major tournament between 2006 and 2017, winning the 2014 World Cup, Loew has earned a second chance.

“Everyone can see that ‘Jogi’ has a plan which we are following through. Something is growing here,” insisted Sane, who shone in Monday’s draw.

The Manchester City starlet – the Premier League’s best young player last season – was a curious omission from the World Cup squad, but not being part of the shambles in Russia did him no harm.

A 3-0 thrashing by the Dutch in Amsterdam in October finally convinced Loew to abandon trust in under-performing stars.

With Ozil retired, Sami Khedira and Jerome Boateng were dropped while Mueller is now just a sub.

Loew has not closed the door on his 2014 Brazil winners for next year’s Euro 2020 qualifiers.

“Having only young or old players will not be successful, it’s a mix that makes it,” Loew insisted.

However, his baffling decision to take off Sane, Werner and Gnabry for the last 30 minutes on Monday back-fired badly as their more experienced replacements failed to help hold the lead.