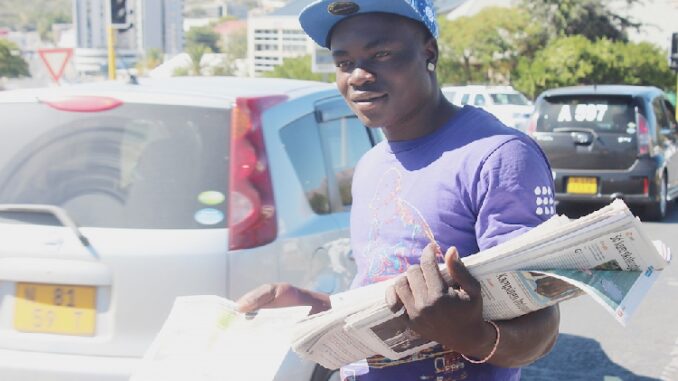 FORTY-NINE-YEAR-OLD Judith Kaseke has been selling newspapers at a busy intersection in Harare for the last 19 years.

Before the pandemic, Kaseke used to sell more than 300 copies daily. Now she even struggles to sell 30 copies per day.

Despite the plummeting of newspaper sales due to the pandemic, the mother of two keeps soldiering on to ensure that her customers continue to get their daily dose of the latest news.

Newspaper distributors are among essential services providers that were a green light by the government to perform their duties smoothly during the ongoing lockdown.

Kaseke said the lockdown imposed to stem the spread of Covid-19 is keeping many of her customers away.

“Most people are working from home, which means the number of people buying newspapers has fallen drastically,” she told Xinhua.

“When the pandemic started, we thought it was going to last for a short period of time. But as time went on, we noticed that cases were increasing,” she said.

Apart from keeping her customers informed, selling newspapers have also enabled Kaseke to buy a piece of land in Harare and to send her child to university.

Several newspaper vendors and distributors in Harare said sales have declined since lockdown was imposed.

Ivene Kurarama, a newspaper vendor near Harare CBD said the demand for newspapers has been hampered by the lockdown drastically.

“Our business thrives when there are many people on the streets. But since people are staying at home due to the pandemic, business is struggling,” he said.

Kurarama said many people who used to buy newspapers are now opting for e-copies instead.

Those who still prefer hard copies are now circulating the same copy among several people to cut on costs.

“Many people have resorted to sharing newspapers. One person buys the paper and then share it with four, five or six colleagues,” he said.

Kurarama said there is also a fear that newspapers are potential virus spreaders.

“Other people are no longer buying newspapers because they say too many people handle the papers and they are afraid of being infected with the virus,” he said.

“Many companies slashed the number of people coming to work. Some of those people who are now working from home were our customers,” he said.

Newspapers were already suffering from falling sales prior to coronavirus.

The transition to digitisation has dealt a huge blow to newspaper sales, with more people preferring to read newspapers online.

Zimbabwe’s major print media outlets have dramatically expanded their online operations in recent years in an effort to increase income from internet advertising.