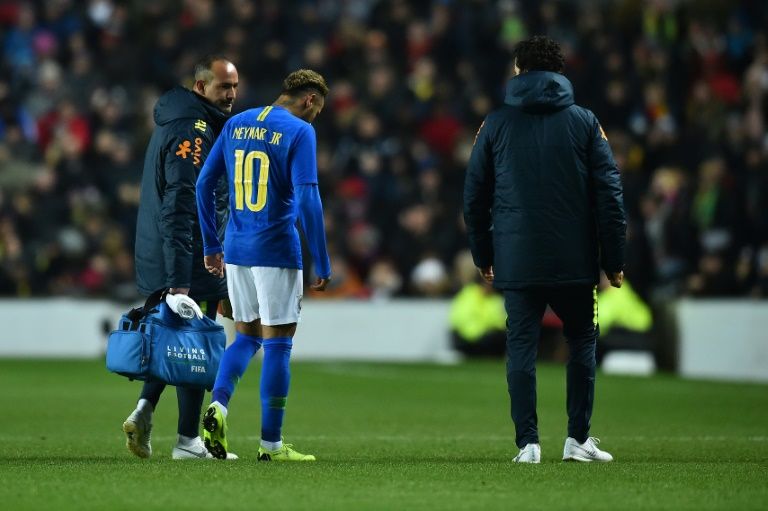 Neymar could be an injury doubt for Paris Saint-Germain’s Champions League clash with Liverpool next week after limping off during Brazil’s 1-0 friendly win over Cameroon on Tuesday.

The forward suffered an apparent groin problem and was replaced in the eighth minute, to boos from the crowd in the central English town of Milton Keynes.

Everton’s Richarlison, Neymar’s replacement, headed in on the stroke of half-time for his third Brazil goal on his sixth appearance to secure victory for the Selecao.

A mixture of cheers and jeers welcomed Neymar, his World Cup theatrics in Russia providing ammunition for his detractors.

And there was little sympathy when the star attraction went off after making little impact.

He sought treatment after five minutes and returned to send a curling right-footed shot high and wide within a minute. He immediately collapsed before being replaced.

But Brazil team doctor Rodrigo Lasmar played down fears of a serious problem.

“He felt discomfort,” Lasmar told reporters. “He will need a bit more time to evaluate it and take a scan, but in principle it is not a serious injury.”

Richarlison appeared dangerous from the moment he was introduced and Roberto Firmino went close three times.

The Liverpool striker almost turned in Willian’s cross but Andre Onana made a fine instinctive save.

Firmino next sent a free header wide from Richarlison’s cross and was then denied by the goalkeeper from point-blank range.

Cameroon might have levelled after 52 minutes, but Stephane Bahoken could not get a touch on Karl Toko Ekambi’s cross.

Fabrice Ondoa almost gifted Brazil a second when Ederson cleared downfield and the Cameroon substitute goalkeeper came 30 metres out of goal and collided with Yaya Banana.

Manchester City’s Gabriel Jesus, on for Firmino, was through, but could only hit the post from a tight angle.

Napoli’s Allan fired straight at Ondoa with four minutes to go and then the latter made a double save, first denying Jesus and then Richarlison.

Jacques Zoua hit the woodwork with a header in the final moments as Cameroon missed out on an equaliser.

PSG host Liverpool at the Parc des Princes on November 28, with all four sides in Group C still in with a chance of qualifying for the Champions League knockout stages.

The French champions, who play Toulouse at the weekend, will also be waiting anxiously for news of Kylian Mbappe, who suffered a shoulder injury in France’s 1-0 friendly win against Uruguay on Tuesday.