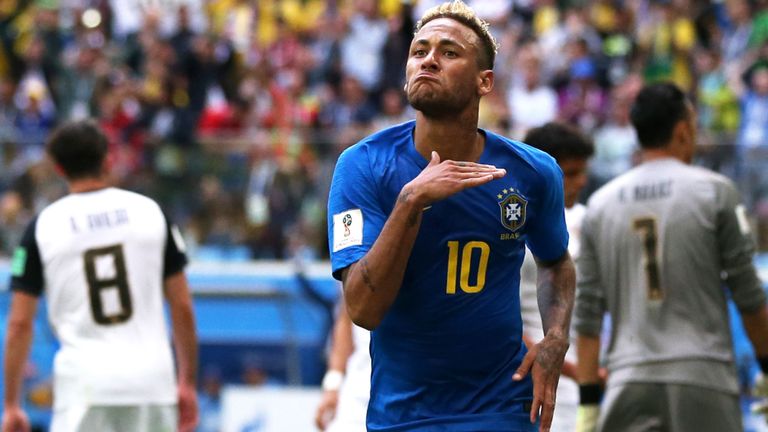 It took until virtually the last kick after 96 minutes of frustration, but Neymar and Brazil have lift-off at the World Cup.

For most of a sunny afternoon in Saint Petersburg, the world’s most expensive player battled against his own lack of match sharpness, an inspired Keylor Navas in the Costa Rica goal and referee Bjorn Kuipers.

However, once Philippe Coutinho broke the deadlock in stoppage time, Brazil’s swagger returned.

The relief of sealing Brazil’s first win in Russia was all too visible as Neymar broke down in tears moments after tapping home Douglas Costa’s cross for a 2-0 victory.

Still haunted by demons after losing 7-1 in the semifinals at their own World Cup four years ago – a game Neymar missed – this threatened to turn into another World Cup nightmare for the five-time winners.

Battered and bruised by Switzerland in a 1-1 draw on Sunday, Neymar’s appeals for more protection did not impress Kuipers, who consistently told the Paris Saint-Germain star to get to his feet instead of appealing for free-kicks.

Even when the experienced official did give Neymar the benefit of the doubt, technology did not. A penalty originally awarded by the referee was rescinded after Kuipers watched a replay of Neymar’s clash with Giancarlo Gonzalez 15 minutes from time.

Moments later, Neymar was booked for petulantly punching the ball in front of Kuipers as Costa Rica players sprawled out on the turf time wasting.

Neymar’s temper threatened to boil over as his frustrations grew at Brazil’s lack of ability to finish as much as Costa Rica’s resistance.

Navas has had to cope with constant speculation that the man between the posts at the other end of the field, Alisson Becker of Roma, is set to take his place at Real Madrid.

However, the 26-year-old showed why he is a three-time Champions League winner with a string of stunning saves to deny Neymar and Coutinho.

Even when Navas was beaten, Neymar curled inches wide as he bore down on goal midway through the second half.

As he hid his face inside his blue Brazil shirt, he had the look of a man who wondered if he had squandered his best opportunity.

Thankfully for him, his time did come when Costa presented Neymar with an open goal deep into stoppage time.

How much an emotional victory proves to be a launch pad rather than a false dawn remains to be seen as the pre-tournament favourites made heavy work of a Costa Rica side that have now lost their past four games.

Much will depend on how quickly Neymar gets back up to speed.

This was just his fourth appearance since breaking a bone in his foot against Marseille in February and only the second time he has completed the full 90 minutes.

Brazil coach Tite has admitted Neymar could need five games under his belt to get back to his best.

There remains the risk the South Americans will have boarded their plane home by the time he peaks again.

However, Brazil now look likely to reach the knockout stages in Russia. They are on four points with Serbia to come in their final Group E outing next week.

They have bought themselves, and Neymar, precious time.