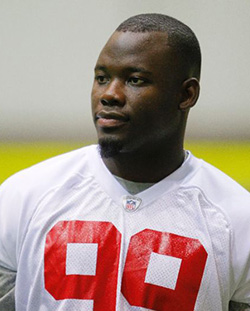 NEW YORK: Stansly Maponga, a Zimbabwe-born defensive end, was signed by the New York Giants on Saturday ahead of their Monday night NFL contest at Miami.
Maponga grew up playing rugby until moving to the United States at age nine, where he was a standout in high school and college.
He was selected by the Atlanta Falcons in the fifth round of the 2013 NFL Draft and signed by the Giants off Atlanta’s practice squad.
The Giants had a roster vacancy after releasing Damontre Moore after a series of altercations with teammates, the latest over headphones.
Early this year; the Zimbabwean star was forced to apologise after claiming he hunted squirrels and deer in Zimbabwe as a kid growing up.
The interview with Fox News Atlanta did not go down well with many Zimbabweans who argued the country does not have any deer.
Maponga is the first ever NFL player from Zimbabwe – a point of much pride.
“Back home, kids grow up a lot quicker because you have to go look for food and stuff like that,” said Maponga. “[I hunted for] mostly deer, squirrel. Also rabbits, too,” he said in the interview.
But instead of focusing on his amazing journey to superstardom, many Zimbabweans hammered him for what they felt was an exaggeration of his background. On Saturday Maponga was quick to issue an apology on his Instagram account.
In his apology he explained that he was not prepared for the interview and that when he said “deer” he actually meant to say mbeva (mice). Maponga said they did not hunt animals in order to survive but that “we hunted common animals leisurely when younger.”
Below is the full statement from Maponga
“Thank you so much for the support on and off the field, I’ve been truly blessed. I am a PROUD Zimbabwean and it is an honor to holster the name of my country on my back every time I step on the field. With that said, I would like to extend an apology to my Zimbabwean family for some of the comments I made on Fox News.
“Truthfully, I wasn’t prepared for the interview for I was just getting done with practice, nether-less that’s not an excuse. I wasn’t acclimated to answering those questions. Let me clear a few things up, no we do not hunt to survive in Zimbabwe. We hunted common animals leisurely when younger.Advertisement

“As kids, we were raised actively and we didn’t stay couched up in the house all day playing video games. No, we enjoyed the outdoors and in Zimbabwean culture we’re taught the essence of loving and protecting nature.
“In actuality we haunted “mbeva” which is slightly comparable to deer over here in the U.S. That’s why I said deer, I didn’t know the proper term to use I just wanted to paint a picture in people’s heads. We also enjoyed catching small creatures resembling squirrels, but not necessarily squirrels.