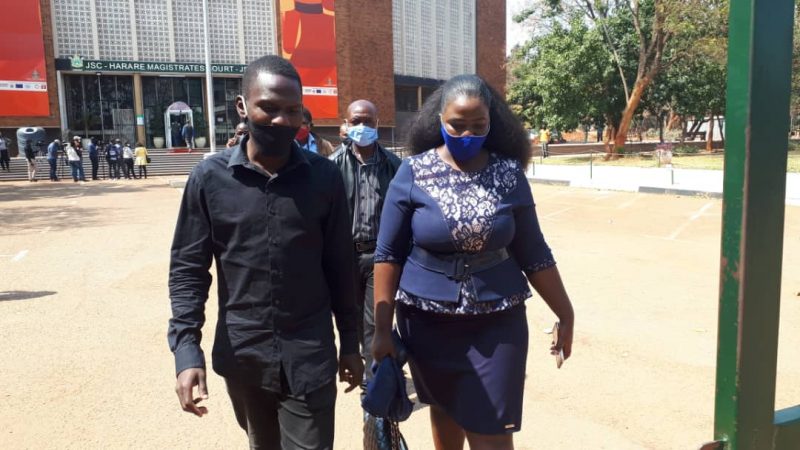 THE wife of jailed July 31 protest organiser and opposition Transform Zimbabwe president Jacob Ngarivhume has said although her life had become difficult since her husband’s arrest and subsequent detention, she found solace in that he was innocent.

Ngarivhume was arrested on 20 July on charges of inciting public violence.

Next Tuesday, when his fresh bail application is heard at the High Court, he would have clocked over 40 days at the heavily fortified Chikurubi Maximum Security Prison.

The opposition leader is classified as a dangerous remand prisoner and has to spend most of his time daily, in leg irons.

NewZimbabwe.com this week caught up with Nyashadzashe, who has been in and out of courts persuing her husband’s bid for freedom.

Although Mai Ngarivhume tried to choose her words, she said life without her partner had not been easy.

“It has not been easy. The road has been rocky. The burden has been heavy knowing that your husband is in prison and you believe that he is innocent,” she said.

“He has not done anything wrong. He is now in chains for the hope of Zimbabwe. So, we keep the faith.”

She said at home, the couple’s children were always lightening her up as they also believed their father was innocent and was fighting a good cause.

“The children are missing their dad. They always tell me to pass their greetings to him and how much they missed him. They are, however, proud of their dad.”

Moses Nkomo, one of Ngarivhume’s lawyers told NewZimbabwe.com that despite being imprisoned for over a month, Ngarivhume remains in good spirits keeping faith that he will soon be freed as he is innocent.

“He is very strong. He remains resolute and is in high spirits. We are hopeful that he will be freed on bail following the latest appeal,” Nkomo said.

Nkomo further said Ngarivhume’s prison conditions have slightly improved as his wife, few more relatives and his lawyers are allowed to visit him.

They remain in remand prison fighting to be granted bail.