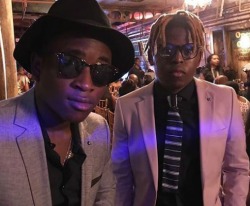 The National Youth Development Trust, (NYDT) has organised a youth voter registration incentivising musical concert which will feature popular Durban hit makers, Destruction Boyz.
Also lined up are local artists for the show to be held at Amphitheatre in Bulawayo on the 16th of December.
In an interview with New Zimbabwe, Liberty Bhebhe, NYDT director, said the revellers will be required to provide voter registration proof to gain access into the show.
“By bringing Destruction Boyz which is popular among the youths, we are trying to incentivise youths to register and vote in next year’s elections. The show will be free but only those with valid voter registration slips will be allowed to gain entry into the show,” said Bhebhe.
He said his organisation was also negotiating with the Zimbabwe Electoral Commission (ZEC) so that the commission can set up a mobile voter registration centre at the show’s venue.
“We are negotiating with ZEC so that they can set up a mobile voter registration centre at the show’s venue. Those people who want to attend the show can easily register and attend the show.  Commissioners of oaths will be on hand to sign the affidavits of those youths aspiring to vote,” said Bhebhe.
He said the show is part of a raft of campaign activities which the lobby organisation has organised to encourage Bulawayo youths to go and register to vote.
“As a lobby organisation, we are worried about the low number of people who have registered to vote in Bulawayo. Going forwards, we will be coming up with numerous programmes to encourage people especially young people to go and register to vote,” he said.
Bhebhe also said his organisation was assisting youths with transport in urban areas to go and register to vote.
“We are aware that some voter registration centres are very far away. As NYDT, we are encouraging all youths with transport challenges to contact us. We will provide transport for them to go and register to vote. We will also provide commissioners of oaths,” he added.
According to recent voter registration figures released by ZEC, Bulawayo has recorded the least number of registered voters.