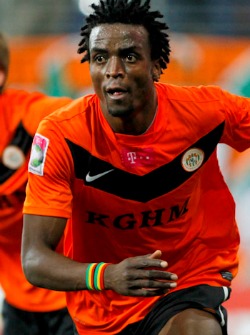 ZIMBABWE international defender Costa Nhamoinesu is bracing up for a new challenge at Czech Grambinus Liga giants Sparta Prague
Costa arrived in Prague as a free agent late last month from Polish Ekstraklasa side Zaglebie Lubin and signed a two-year deal.
The Czechs beat Spanish La Liga side Granada as well as an unnamed Russian and Turkish club for the 27-year-old fullback’s signature.
After spending six seasons at Zaglebie Lubin, preceded by another term at lower league side KS Wisła Ustronianka, Costa feels he is geared up for the Czech challenge.
“I’ve never been afraid of fighting,” Costa told Sparta’s website.
“I came here to achieve my goals and I’m going to do as much as I can to make it. I know what kind of team Sparta is, that they are connected with success, and I’m really looking forward to being a part of it.”
Following an impressive pre-season camp in Upper Austria which ended last week as Sparta won three and drew one match, Costa begins his debut Grambinus campaign away at Vysocina Jihlava on 21 July.
Sparta would have however played Swedish Allsvenskan side Hacken in the Europa League three days earlier.
The Zimbabwean captained Sparta during their first pre-season friendly against Hungarian outfit Kecskeméti, but the armband has now been handed to David Lafata for the rest of the season.
Sparta, who are celebrating their 120-year anniversary this season, produced famous players such as Chelsea keeper Petr Cech, former Manchester United player Karel Poborsky, Arsenal’s Thomas Rosicky, former Juventus star Pavel Nedved, former Liverpool attacker Patrik Berger and former Dortmund player Jan Koller.Advertisement