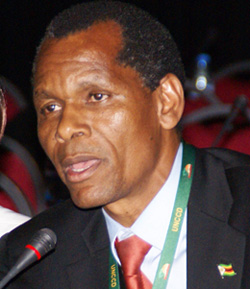 INDIGENISATION minister Francis Nhema on Thursday hinted that the government could introduce a levy to finance empowerment initiatives.
The indigenisation law, which demands a 51-49 threshold in favour of black locals in foreign-owned businesses, has been criticised for blocking the flow of fresh capital into Zimbabwe’s moribund economy.
Government has previously admitted that locals have no money to pay for shares in the companies. Nhema, who was addressing a forum on the indigenisation law, said the levy would allow people to create new wealth.
“What I am going to say might cause you discomfort but I am thinking of (an) empowerment levy so that we then empower the people to create their own wealth. You can never keep distributing what you have already distributed,” he said.
Pressed for further comment on the proposed levy, Nhema said: “Really I said it out of humour…, there is no levy coming, I have not asked for it yet.”
He refused to comment on recent statements made by fellow ministers that government intended to amend the empowerment law to make it more investor friendly.
Finance minister Patrick Chinamasa and information minister Jonathan Moyo have said changes would soon be introduced and that Nhema had been tasked with ensuring that the amendments were effected.
Nhema said: “Why do you hustle me? Let me give you what is mine. I would not want to comment on what Jesus said on the mountain, I was not there.”
He said most people who criticised the indigenisation law, passed in 2008, had not bothered to read the statute.
He said most investors were more worried about policy consistency and not the law itself.
“We have to be consistent so that the investor will come knowing what to expect and not get surprises,” he said.
Nhema said the law was not cast in stone and that it was not a one size fits all.
He said the major difference on compliance was that demands for investors in the resource sectors such as mining were different from the non-resource sectors.
“We have already said we have an asset in those resources. In our negotiations, those resources form the 51 percent,” he said.
The shareholding structure in non-resource sector was more flexible but would in the long term be expected to comply with the 51-49 percent threshold, he said.Advertisement

“We are not here to shut down companies; it is not in our interest. We are not here to victimise anyone,” he said.
“But in the process of achieving our goals, there are people who might not understand them and we have misunderstandings.”
Ambassadors mainly from western countries also attended the meeting and sought clarifications on the law from Nhema.