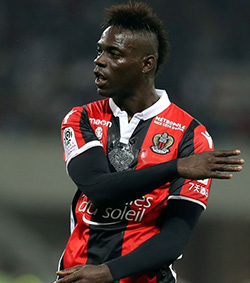 FRENCH club Nice says striker Mario Balotelli was shown a yellow card for complaining about racist abuse he received from Dijon fans on Saturday.
Nice tweeted the Italian forward, who was booked in the 74th minute of a 3-2 away defeat by referee Nicolas Rainville, was cautioned after remonstrating with fans about the abuse. No further details were given.
In comments after the French league game posted on Nice’s official website, Nice coach Lucien Favre and club president Jean-Pierre Riviere were critical of decisions made by Rainville but did not mention Balotelli.
In January 2017, Balotelli — the son of Ghanaian immigrants to Italy — spoke out against Bastia fans he said made monkey noises during a match. The French league subsequently opened an investigation.
Advertisement