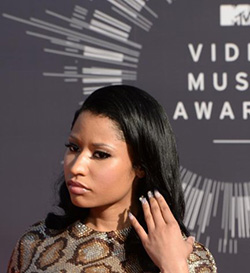 HIP-HOP star Nicki Minaj apologised Tuesday and denied any Nazi sympathies after she came under criticism for imagery that resembled the Third Reich in a video.
The video for “Only” is an animation that depicts the singer enthroned at a Greco-Roman building with red-and-white flags on the columns similar to the Nazi German flag — except with a symbol for Minaj instead of a swastika.
Tanks and troops stand at attention, evoking images of Adolf Hitler’s rallies. The song also features fellow stars Drake, Lil Wayne and Chris Brown.
Minaj, who this weekend hosted the MTV Europe Music Awards in Glasgow, Scotland, responded that the inspiration for the video was in fact the cartoon series “Metalocalypse.”
The singer wrote on Twitter that both the producer and a person overseeing the video, whom she described as a close friend, were Jewish.
“I didn’t come up (with) the concept, but I’m very sorry (and) take full responsibility if it has offended anyone. I’d never condone Nazism in my art,” she wrote.
The Anti-Defamation League, which combats anti-Semitism, earlier called the video “deeply disturbing” and noted that it was released on the anniversary of Kristallnacht, the 1938 night of attacks on Jews across Germany and Austria.
“This video is insensitive to Holocaust survivors and a trivialization of the history of that era,” said the group’s national director Abraham Foxman.
Foxman issued a new statement to welcome Minaj’s apology.
“We hope that she will take further steps to educate herself and her fans about who the Nazis were and why we should never take genocide or the Holocaust lightly,” she said.Advertisement