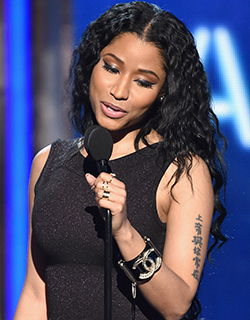 HUMAN rights groups have urged rapper Nicki Minaj to cancel an upcoming concert in Angola after concerns about abuse and corruption in the country.

Minaj is reportedly due to perform in the capital, Luanda, in a concert organised by the mobile phone company Unitel.
“Guess who’s performing in Angola Dec 19th at the Unitel Christmas Festival,” Minaj tweeted, also sharing the event’s poster on her Instagram account.
The award-winning rapper will share the stage with local acts at the stadium concert, according to the Unitel website.
The Human Rights Foundation said the Angolan president’s daughter owns a large stake in Unitel.
“Nicki Minaj is a global artist,” the foundation’s president, Thor Halvorssen, said in a statement. “There is no good reason for her to do business with the corrupt Angolan dictatorship and endorse the ruler’s family company.”
The group has written a letter to Minaj, urging her to cancel the performance and instead support a local rapper who was jailed along with other youth activists.
“As a strong-willed independent artist, shouldn’t you be advocating for the release of the imprisoned rapper Luaty Beirao (who was arrested in June and charged with preparing a rebellion) rather than entertaining the dictator and his thieving family?” the letter read.
“Nicki Minaj is following in the footsteps of Mariah Carey, callously taking money from a dictator who’s been in power for nearly four decades,” said Jeffrey Smith, Africa policy director for the Robert F Kennedy Human Rights group.
Minaj has not commented on the criticism.
Mariah Carey performed at an Angolan Red Cross gala in Angola in 2013, according to the Human Rights Foundation. She was reportedly paid $1m for the performance, sponsored by Unitel.
President Jose Eduardo dos Santos has ruled the oil-rich country for 36 years.