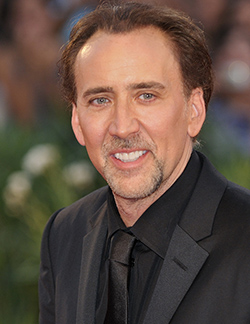 OFFICIALLY the most interesting man in Hollywood, Nicolas Cage has more cocktail party stories than all of us could amass in a lifetime; he adopted ‘Live fast, die young’ as his motto (adding ‘and make average movies’ around 2007) and has bought and sold a menagerie of bonkers items in his 49 years on Planet Earth. He also went broke, which was no coincidence.
Just imagine the poor accountant whose job is was to find receipts for this little lot…
A $300k Lamborghini previously owned by the Shah of Iran. Because, really, where else are you going to get a Lamborghini from? A car dealership? Clearly you know nothing about Nicolas Cage.
A pyramid-shaped super tomb

Sooner or later, we’ll have to face facts: Nicolas Cage is going to die one day. I know, perish the thought. At least when Cage does shuffle off this mortal coil, his eternal resting place will be a 9-foot tall pyramid-shaped super-tomb in New Orleans. It makes other super-tombs look like paupers’ graves.
Lots and lots of cars
We know Nicolas Cage likes to drive, and drive angry, but quite what he planned to do with his nine Rolls Royces and around two dozen other assorted vehicles, we’ve no idea. Maybe he got a little too into character while researching his role in ‘Gone In 60 Seconds’. Or maybe he’s just mental.
A medieval castle

Did you know Nicolas Cage is from German ancestry? That was reason enough for him to buy (and later sell) the medieval castle of Schloss Neidstein in the Oberpfalz region in Germany. He also bought (and later sold) Midford Castle in Somerset, where he enjoyed “a Dickensian Christmas”.
Two yachts and a private Gulfstream jet
If you think Nicolas Cage only travels by land, then friend, you’ve got another thing coming. Obviously guys like Cage need to have two yachts, because what if one breaks? You don’t want your private jet to be your only method of transportation. You’d look like an idiot!
‘The most haunted house in America’
Advertisement

Nicolas Cage = friend to ghosts. The actor owned a home in the French quarter of Louisiana that used to belong to Delphine LaLaurie, a socialite serial killer who tortured slaves. The house is said to be the most haunted property in America. There is a slight chance this is why Cage bought it.
A Bel Air home that used to belong to Tom Jones and Dean Martin
According to the counter-complaint filed by his ex-business manager Samuel Levin, Cage at one point owned “15 personal residences” and was “living beyond his means”. You don’t say.
“Millions of dollars of jewellery and art”
More from the Levin files: Cage is alleged to have spent his fortune on, among other things, “12 purchases of expensive jewellery and 47 purchases of artwork and exotic items.” Well, if you own 15 personal residences, you can’t hang movie posters on ALL the walls, right?
A private island in the Bahamas
Cage purchased the Bahamian island of Leaf Cay for just $3 million in 2006, probably just for somewhere to keep all his stuff. An exotic paradise with long sandy beaches and tropical palms, it’s just down the way from pal Johnny Depp’s island, from whom we’re guessing Cage frequently borrows sugar.
A cornucopia of exotic pets
Including, but not limited to: lizards, two albino King Cobras, stuffed birds (not technically pets but still weird), salt-water sharks, an octopus and a frickin’ crocodile. Let’s just hope for Cage’s sake they’re all friends with one another.
A dinosaur skull

In 2007, Cage successfully bid $276,000 on an auction for the skull of a Tarbosaurus – a large, bipedal predator, dino-fans – narrowly pipping Leonardo DiCaprio of all people to the post. This would be the maddest thing to ever happen to most people. For Nicolas Cage, it was a Tuesday.
The geekiest collection of comics ever
Though he’s since had to flog much of it off to fund his tax debts, Nicolas Cage at one point owned the most iconic comic-book ever made: he bought Action Comics #1 (aka the first ever appearance of Superman) for $110,000 in 1997, then sold it in 2011 for $2.16 million. It pays to be a geek.
Shrunken pygmy heads
According to visitors of casa Cage, Nic has a set of shrunken heads on display. Suddenly the sharks in his bath don’t look half as crazy.