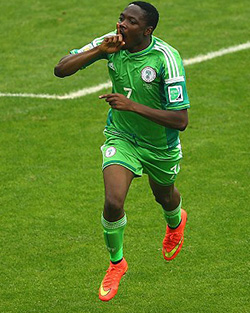 NIGERIA’S World Cup squad has received the bonuses which the players were owed, the team spokesman said Friday, as they returned to training ahead of their second round match against France.
The comments followed earlier reports that players were demanding unpaid bonuses and that a training session on Thursday night had been cancelled because of the dispute.
However, media officer Ben Alaiya told reporters: “It is settled now. It’s absolutely settled now. Let’s not dwell on the past. There is no problem now — that is why everyone is training.”
Alaiya said Thursday’s training had been cancelled because a team meeting near its base in Campinas, north of Sao Paulo, had overrun, leaving no time for the session.
“We never had problems with money,” Alaiya said. “Everybody is paid what they are due, up to date. There are no bonuses owed to the national team of Nigeria.”
The African champions flew to the capital Brasilia on Friday ahead of the knockout game against the French on Monday.
Nigeria is not the only African team to have had problems with player payments.
Fellow West African teams Cameroon and Ghana have both had their World Cup campaigns badly distracted by pay disputes.
Cameroon’s squad refused to get on a plane to Brazil at the beginning of the month until their bonuses were improved and Ghana said it flew in cash from back home to keep its players happy ahead of the decisive final group game against Portugal.
Both Cameroon and Ghana were eliminated in the group stage.
Last year, Nigeria arrived days late for the Confederations Cup in Brazil because of a row over player payments, which resulted in the squad refusing to leave a hotel and travel for the World Cup warm-up tournament.
The problems also re-surfaced earlier this month at the World Cup and a Nigerian politician visited the team camp in Campinas to mediate between players and federation officials.
The Nigeria Football Federation then announced two weeks ago that the bonus structure had been agreed upon, with players getting $10,000 for every game they win in the group stage.
The bonuses will improve with victories in the knockout stages. Each player would get an additional $12,500 for beating France in the last 16.
Nigeria’s team meeting on Thursday came just hours after the NFF released a statement saying there were no problems in the squad over bonuses.Advertisement

“We understand that some people are playing politics but they must leave us out of it so that we can do well here and go far in the tournament,” coach Stephen Keshi was quoted as saying in the statement.
Nigeria qualified second behind Argentina in Group F, making the second round of the World Cup for the first time since 1998.

Meanwhile, the pace and power of Nigeria’s attack will give France’s defence its biggest test of the World Cup so far when they meet in Monday’s round of 16 match.
Although France kept two clean sheets in the group stage — against Honduras and Ecuador — the variety in the African champion’s forward line offers a much stiffer proposition, and it has already caused problems for bigger teams than France.
Winger Ahmed Musa will be closely marked after scoring both goals in a 3-2 loss to Argentina. His speed was a constant threat and he will look to expose the space behind France’s fullbacks — who are given license to push up in coach Didier Deschamps’ attack-minded team.
Emmanuel Emenike is a bustling, powerful striker, and veteran forward Peter Odemwingie has the technical ability to unlock defenses and has shown in the Premier League with West Bromwich Albion and Stoke that he is also a sharp finisher.
“They’re a good team, they caused Argentina problems. They are powerful, quick up front and hardworking in midfield,” said France midfielder Yohan Cabaye, who is set to return to the side following suspension. “They play with a lot of energy.”
“I heard that they went on strike,” said France defender Bacary Sagna with a hint of irony, considering he was part of the France squad that didn’t train in 2010. “It changes nothing because they’re the best African team around.”
“They’re African champions and some of their players play for top European clubs, some in the English league,” Sagna said. “We know they’re a dangerous team and that we’ll have to be patient.”
France likes to dictate play, but given Nigeria’s propensity to throw players forward, Deschamps may pick his team with quick counterattacks in mind.
He has yet to truly decide what his favored lineup is, making surprise selections in all three group games so far.
Olivier Giroud and Antoine Griezmann are challenging for a starting spot alongside Karim Benzema and Mathieu Valbuena in France’s three-pronged attack, while Paul Pogba and Moussa Sissoko are contesting a place in midfield.
Griezmann and Sissoko are quicker players and better suited to playing on the break than Giroud and Pogba.
But Deschamps’ final decision could be influenced by the volatility of Giroud and Pogba. Both have escaped straight red cards: Giroud for elbowing Ecuador’s Gabriel Achilier and Pogba for aiming a wild kick at Wilson Palacios against Honduras.
Sakho also avoided a potential sending off for elbowing an Ecuador player in the face, and French nerves will have to hold firm in Brasilia.
“You must do all you can to concentrate, and to stay calm in the difficult moments,” Sagna said.