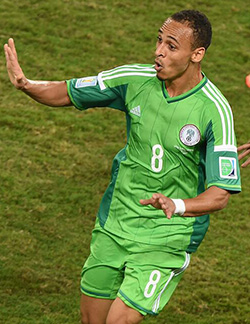 NIGERIA eliminated Bosnia-Herzegovina from World Cup contention with a 1-0 win Saturday, with Peter Odemwingie’s first-half goal getting the African champions closer to the knockout stage.
Odemwingie sealed Nigeria’s first victory at a World Cup since 1998 — spanning 10 matches — by finishing from close range in the 29th minute after one of a string of powerful runs by fellow striker Emmanuel Emenike. The result put tournament newcomer Bosnia-Herzegovina out of contention.
The Bosnians faded after a bright start, during which star striker Edin Dzeko had a goal contentiously disallowed for offside, and is still without a point in Group F following a 2-1 defeat to Argentina in its opener.
A draw would have given the Bosnians something to play for in their last group match, against Iran, but Dzeko had a shot tipped onto the post by goalkeeper Vincent Enyeama in the final few seconds.
“I don’t have any recriminations,” Bosnia-Herzegovina coach Safet Susic said. “They are all depressed, disappointed, silent.”
Nigeria needs a point against Argentina on Wednesday to be guaranteed a spot in the Round of 16 — and a surprise win would secure top spot in the group.
With Africa’s five teams starting the World Cup with just one win from their first eight matches, the continent was able to enjoy a rare success in Brazil.
“I guess everyone is happy in west Africa, it is good for the continent,” Nigeria coach Stephen Keshi said, referring also to Ghana’s 2-2 draw with Germany earlier Saturday. “I liked the character the boys showed, the fighting spirit in the team.”
There had also been added motivation for Keshi’s team, which was seeking to boost the spirits of Nigerians in the wake of a suicide bombing attack at a World Cup viewing site in the northeast of their country. At least 14 people died in the blast.
Nigeria was too strong and experienced for the Bosnians, whose soft centre in defence failed to deal with the power of Emenike in energy-sapping conditions in the western Brazilian city of Cuiaba.
“They surprised us with their speed and movement,” Susic said. “They wanted to win probably that much more than us.”
The recall of Odemwingie, who was impressive as a substitute in the 0-0 draw with Iran, gave Nigeria an extra goal threat — demonstrated by his calm finish just at a time when Bosnia-Herzegovina was on top.Advertisement

Emenike powered past the tame challenge of Bosnia defender Emir Spahic and charged down the right flank before crossing for Odemwingie, who shot first-time through the legs of goalkeeper Asmir Begovic — his teammate at English club Stoke.
By that stage, Bosnia-Herzegovina should have been ahead, with Dzeko finding the net in the 21st only for the goal to be ruled out for offside. Replays appeared to show Dzeko was level with the last defender.
“I was told there was no offside,” Susic said. “But this is not the first or last refereeing mistake, not just at the World Cup or elsewhere.”
Otherwise, Dzeko’s finishing was off-key and with their best player struggling, the Bosnians looked disheartened in the early stages of the second half.
Begovic kept his team in the game with saves from Michael Babatunde and Emenike before Bosnia-Herzegovina’s late rally created a good chance, Dzeko turning his marker in a crowded penalty area and side-footing a shot that was kept out by Enyeama.