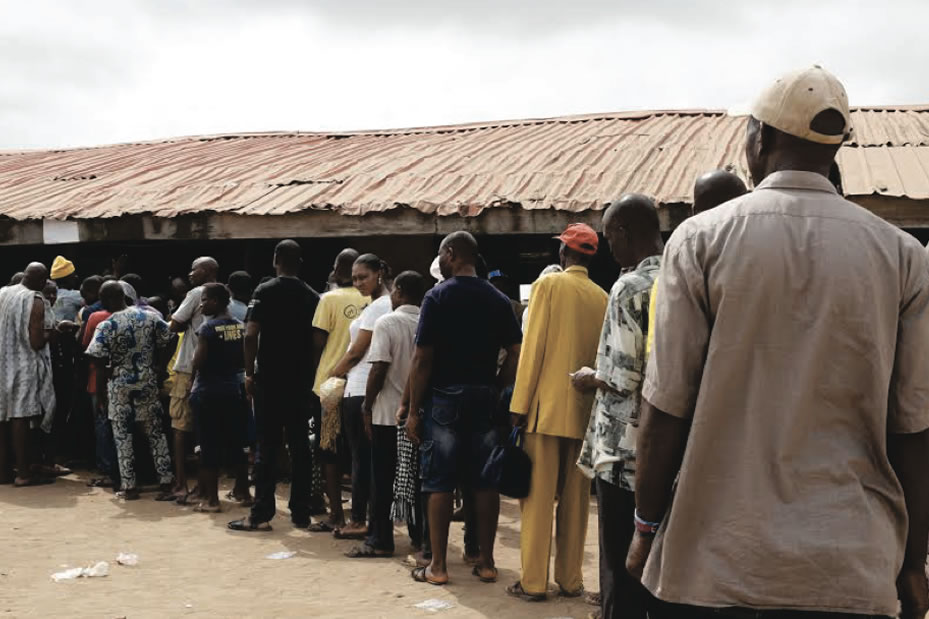 Displaced people in north-east Nigeria have told the BBC they were transported through a dangerous conflict zone ahead of the country’s elections in an operation agreed by the main political parties.

The BBC has been told that the unescorted convoys were organized with the agreement of the ruling All People’s Congress (APC), the main opposition People’s Democratic Party (PDP) and the Independent Nigerian Election Commission (Inec).

Several thousand displaced people are believed to have been moved back to their home areas temporarily in order to vote.

Nigerians had been due to vote on 16 February but the polls were postponed until this Saturday.

Several witnesses described how displaced people had been organized into what they said was an unescorted convoy to make the journey from Maiduguri, the capital of Borno state, to the town of Monguno – a journey of 140km (87 miles) through territory which is known for attacks by Boko Haram and Islamic State West Africa (Iswap).

Over the years, violence across the state has driven thousands to seek shelter in Maiduguri. But this, say senior officials from both main parties, creates logistical difficulties for those organizing these elections because they would have to provide separate voting centers for each displaced group.

Officials decided that the larger groups could go back home to vote, if their towns were deemed safe.

Many of the displaced were originally from Monguno and had been uprooted in earlier attacks.

The BBC spoke with two men who said they were part of a convoy of buses and lorries which travelled from Maiduguri to Borno in the days before the election was originally due to take place.

At their request we have protected the men’s identities.

“Mamdu”, a farmer and father of eight children, said that there were 10 buses and three lorries.

He estimated that each bus carried between 90 and 96 people.

We asked if they were afraid and whether Boko Haram operated on that road.

“Yes there is,” he replied. “The road is very dangerous and it is only God that protects.”

We asked him why he had made the journey.

He said he was first given 2,000 naira as an allowance, with more to come after the voting.

“It’s because of the poverty we are facing,” he replied, “and they promised to give us 20,000 each – that’s why we decided to go with them”.

“Ibrahim” said he was afraid on the journey and that people had been complaining that day because there was no water and there was no escort.

He too said he had gone because “I have family, thinking that the money I will get will help and solve some of my problems”.

He said there was no arrangement about returning.

A vehicle was sent and the displaced “fought and rushed before we got in the car – and some of them are still in Monguno”.

Isa Gusau, a spokesman for the state governor, rejected allegations of cash inducements, saying there was no need to offer money as the opposition had “near zero” chance of winning in the area.