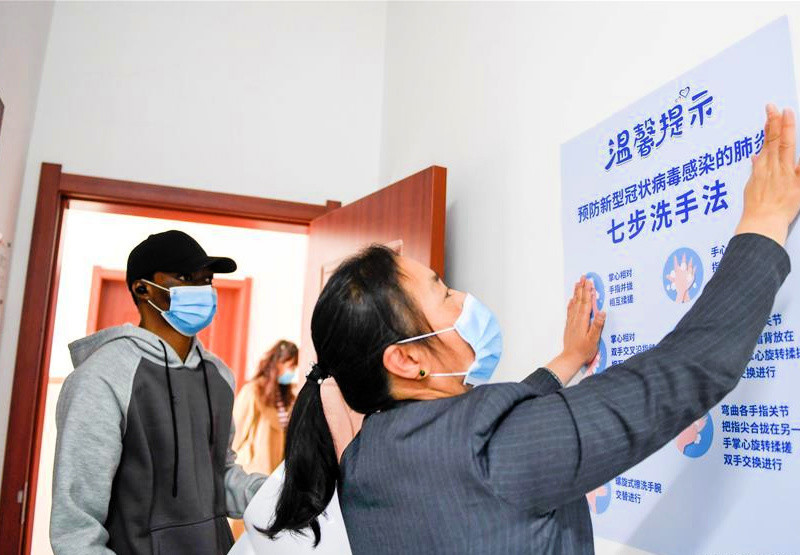 Mustapha Abdul Raheem has experienced two epidemics in the past six years: one was the Ebola in West Africa in 2014, during which he witnessed sufferings and aspired to study medicine; the other was the Covid-19. This time as a medical student in China, he was better prepared, both professionally and mentally.

The 22-year-old Nigerian has a Chinese name — Shengli, which means victory. His original plan for the winter break was to finish his hospital internship and do some traveling. But the outbreak put a temporary pause to all that.

After taking online lessons on Wednesday afternoon, he helped his teacher to put up posters of the seven-step hand-washing method. As a class monitor of the Changchun University of Chinese Medicine, he has done a lot to fight the coronavirus.

The university has taken timely measures, including taking temperatures for everyone, disinfecting the buildings, and distributing masks. To minimize infection risks, Mustapha volunteered to note down his classmates’ needs for necessities, make the purchases and deliver them to their doorsteps.

He also served as an amateur psychological counselor if any of his classmates became anxious.

He paid close attention to the epidemic situation every day. “I’m more interested in the number of cured cases, which brings hope,” he said.

Quarantined in his dormitory, he encouraged his classmates to watch movies, read and pick up cooking.

In the meantime, he and his classmates have shot some short videos to be circulated on social media platforms. In those videos, he showed viewers how to protect themselves during the epidemic.

“Shengli has made some solid contributions. The students here are very impressed with his deeds,” said Yan Qi, a teacher at the school of international education.

Shengli also shared the videos with his friends and family in Nigeria and introduced China’s effective measures in epidemic prevention and control.

“I discussed it with my parents, and they both agreed that China’s measures have set quite an example. We have become ever more confident since we knew that China was helping Africa to fight the epidemic,” he said.

“Just as my Chinese name tells, together we will get a victory eventually,” Shengli said.

The university and its affiliated hospital have sent over 60 medics in two batches to aid the coronavirus fight in Wuhan, some of whom he knew about and respected.

Though desperately wanting to become a doctor and fight the virus on the frontline, he said the special quarantine period taught him something of equal importance — to be a doctor of noble character.