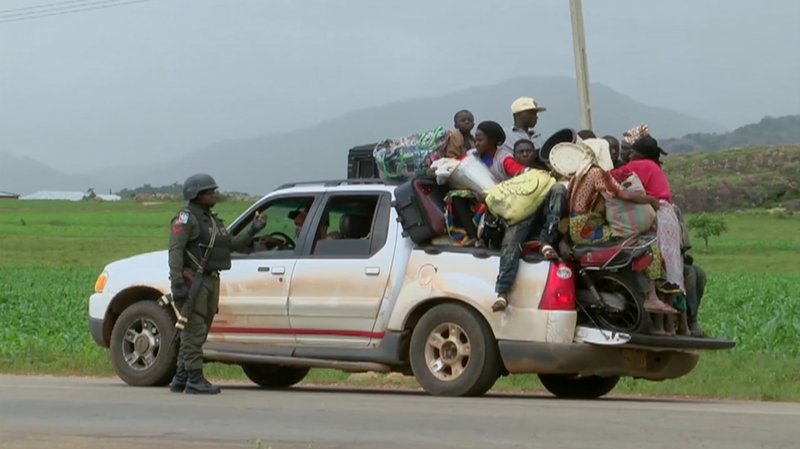 Nigerian police say 128 people have been arrested for suspected election-related offences, including ballot box-snatching, vote-trading and impersonation, while a “cache of explosives” was found.

The police statement gives no further details about the explosives but says 38 “assorted weapons” also were seized.

The statement says that despite the “few unfortunate incidents” on Saturday’s election was generally successful, though it expresses deep concern about hate speech by some politicians and supporters.

One analysis unit recorded 39 deaths in election violence, including an extremist attack in the northeast.

Africa’s most populous country has voted for president and more than 450 National Assembly seats.

Official results are expected as early as Monday, though voting continued in scattered areas on Sunday because of various delays.

Nigeria’s election commission says it is happy with Saturday’s generally peaceful election but it reports the killing of an election worker.

Chairman Mahmood Yakubu says the worker was hit by a bullet while returning from election duty: “May her soul rest in peace.”

The chairperson also says the national vote compilation center will open in Abuja Sunday evening, with at least one state among Nigeria’s 36 already on the way to the capital after completing its vote count.

Yakubu says voting continued on Sunday in some parts of several states after the process was extended because of various issues.

He says that “Nigerians have demonstrated extraordinary resilience and abiding faith in electoral process.”

But he notes that some election workers faced “intimidation, abduction, hostage-taking and violence.”

A Nigerian analysis unit says at least 35 people have been killed in election violence this weekend.

SBM Intelligence says it is monitoring security for a nationwide civil society platform watching the election. Its head of research says they are using a network of informants and comparing their information with media reports.

SBM says the 35 dead include seven people killed in a shootout between Nigeria’s army and political “hoodlums” in Rivers state in the south. The army reported the deaths late Saturday in a statement.

A spokesperson for Nigeria’s electoral commission says voting is still taking place on Sunday “in several places” across the country.

Oluwole Osaze-Uzzi, the commission’s director for publicity, gave no details about specific states where polls are still open. But some of the states affected by delays reportedly include Plateau, Nasarawa and Jigawa.

The head of the electoral commission is expected to address the nation later on Sunday as Nigerians await the results of Saturday’s presidential election.

The election has been marred by sporadic violence and delays at some polling stations that faced problems ranging from missing stamps to malfunctioning card readers.

More than 72 million people were eligible to vote.

Vote counting continues as Nigerians await the outcome of a presidential poll seen as a tight race between the president and a former vice president.

Although voting was peaceful in most areas on Saturday, there were a few outbreaks of violence in the vast West African country and many reports of delays at polling stations.

Many polling stations stayed open after dark to allow people waiting in line to vote. More than 72 million were eligible to vote in the election.

Amid the delays, it’s unclear when a winner will be announced.

President Muhammadu Buhari, who won election in 2015, is seeking his second term.