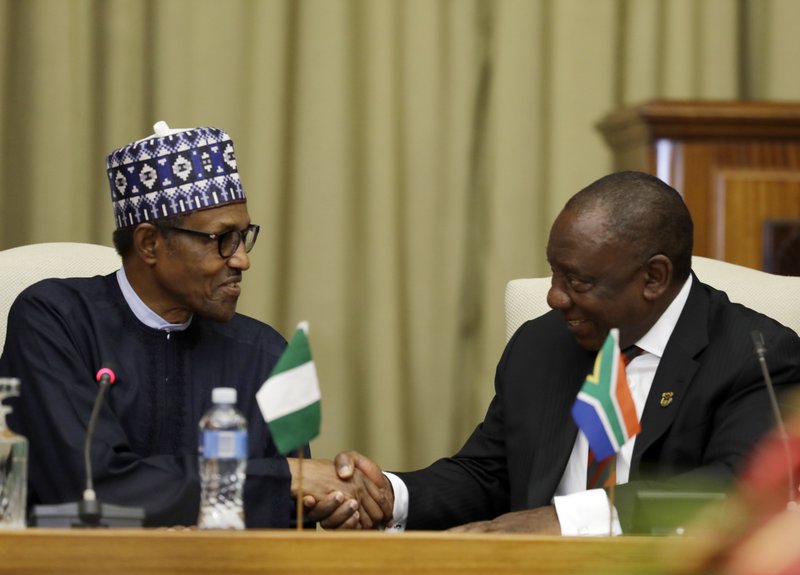 Nigeria’s president was meeting with South Africa’s leader on Thursday after a wave of attacks on foreigners angered many African countries and led to an extraordinary airlift to take hundreds of Nigerians home.

The talks between Nigerian President Muhammadu Buhari and South African President Cyril Ramaphosa is also a meeting of Africa’s two largest economies, with more than $3.3 billion in trade between them in 2018.

South Africa has been making efforts to mend ties with Nigeria and others after its government faced criticism for not explicitly speaking out against xenophobia at first but instead framing the violence as crime.

More than 12 people were killed and more than 700 arrested after bands of South Africans in Johannesburg and the capital, Pretoria, launched attacks against foreign-owned shops and stalls, looting and burning the small businesses and attacking some shopkeepers.

South Africa’s president now says his government is “totally committed” against attacks on foreign nationals. He acknowledges frustration about the country’s high unemployment and sluggish economy but has told countrymen not to take it out on foreigners.

Outbreaks of violence against Nigerians and citizens of other African nations have regularly erupted in South Africa in recent years, with some South Africans accusing foreigners of peddling illegal drugs or taking jobs.

The attacks on Nigerians have led to growing sentiments against South African companies doing business in Nigeria, with many people calling for their closure.

The periodic violence against foreigners in South Africa is in sharp contrast to the hospitality that other African nations showed to black South Africans during their long fight against the harsh system of white minority rule known as apartheid, which ended in 1994.