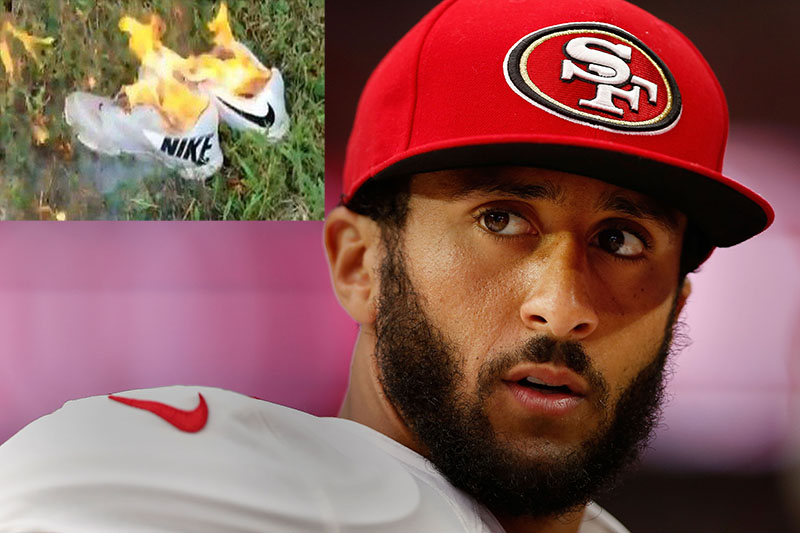 Critics have burned Nike trainers and clothing in protest at Colin Kaepernick’s appointment as the face of the brand’s new advertising campaign.

The American football quarterback, 30, protested against racial injustice and police brutality by kneeling during the US national anthem.

In announcing the deal, Nike said he was “one of the most inspirational athletes of this generation”.

On Twitter, they hit out at the deal using the hashtag #JustBurnIt – a play on Nike’s slogan ‘Just Do It’ – which trended on Twitter alongside #BoycottNike.

According to social media analysis site Spredfast, there were more than 800 tweets using the hashtag #JustBurnIt in a matter of hours on Tuesday morning.

Andrew H. Scott, the mayor of Kentucky city Coal Run, said he was “officially done” with Nike and the NFL and asked Nike to cancel an order, while several videos showed Nike trainers being burned.

Country singer John Rich tweeted a photo of a pair of Nike socks with the brand’s swoosh logo cut off.

However, another Twitter user Teri Shockey countered: “To everyone who is planning to #JustBurnIt, might I suggest you donate your @Nike merch instead? Plenty of people in need, including vets and families of active duty military, would be more than grateful to wear it. #JustDoIt”

However, there has been an outpouring of support for ostracised former San Francisco 49ers player Kaepernick, who first protested by sitting during the national anthem in August 2016, later opting to kneel.

Kaepernick, who has received Amnesty International’s highest honour, has been without a team since he opted out of his contract with the 49ers in March 2017.

“He did so not to disrespect our flag but to give meaning to the words of the preamble of our Constitution-‘in order to form a more perfect union.’ Well done, Colin, well done.”