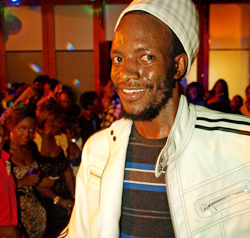 HARARE: Zim-Dancehall star Winky D pulled a crowd of over 8000 at Epworth over the weekend for a peace concept organised by elections lobby groups and rights organisations.
The crowd, comprising mostly youths spilled over Epworth’s Overspill Shopping Centre where the Ninja President, real name Wallace Chirumiko, was performing.
Winky D chanted voter awareness and peace promoting lyrics he composed with the support Heal Zimbabwe, the Election Resource Centre (ERC), and the Zimbabwe Human Rights Association (Zimrights).
The crowd did not only listen and dance to the ‘Maproblems ese Disappear’ hit-maker but also registered to vote at the same venue where the three civil society organisations had brought with them officials from the Zimbabwe Electoral Commission.
Winky D, who had not yet registered to vote in this year’s elections, led by example by doing so after his two-hour performance.
Rashid Mahiya the Heal Zimbabwe Trust’s director told NewZimbabwe.com that using artists was proving to be one of the most effective ways of attracting and persuading youths to register to vote in this year’s elections.
“The objective of the peace concert was to popularize the HZT national peace campaign: 13 Million Voices for Peace and afford citizens an opportunity to pledge to uphold peace before, during and after the 2018 elections,” he said.
“We are carrying on with providing these platforms until the end of the voter registration process and it is our hope as shown by the numbers of people attending and registering to vote that we are going to encourage more people to register to vote this year.”Advertisement