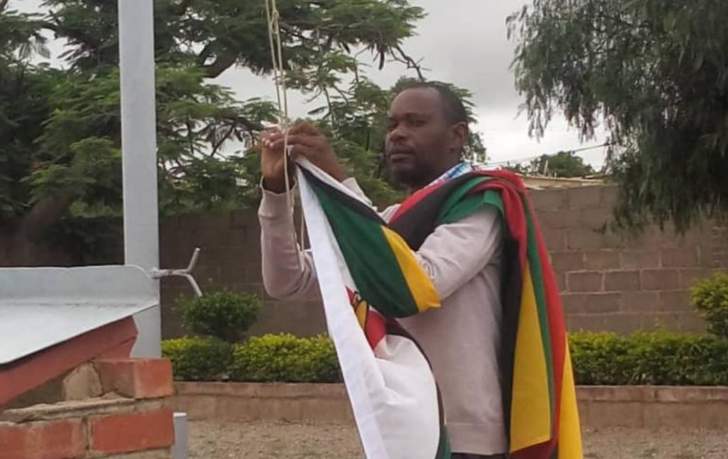 FIREBRAND Njube High School science teacher, Brian Mutsiba, who Monday led students into a demonstrations against exorbitant tuition fees demanded by government, has assured concerned friends and relatives he was safe from his hideout.

The trending educator allegedly incited more than 150 students at the government learning institution into a march around the high-density suburb, castigating Zimbabwean authorities for causing hardship among learners.

And, according to his accusers, the defiance march was done in cheeky fashion, with students pulling down the national flag which they proceeded to wipe their shoes.

Under Mutsiba’s incitement, it is further alleged, students also pulled down President Emmerson Mnangagwa’s portrait which they went on to display disdainfully during the march.

Security agents have since launched a manhunt for the defiant teacher.

Mutsiba wrote a letter from his hideout this past week expressing gratitude to people who provided him with his sanctuary.

Mutsiba also released a 32-second video filmed at his hideout.

“I wanted to let those who are worried about me to know that I am currently safe as of today, January 22. Thank you for the prayers, the support but I am currently still on the run,” he said.

Mutsiba also commended the students for “exhibiting elements of Ghandism” by exercising non-violent resistance through the march.

“My heartfelt gratitude to those who have helped me these past three days, whose names I cannot mention for fear of victimisation.

“The presence of officials from the President’s Office, military intelligence and prisons intelligence on that fateful day is testimony enough to say there are threats on my life.

“So naturally, when there is clear and present danger, one is compelled to seek safety,” further wrote Mutsiba.

Following the demonstration which caught many by surprise, Njube was besieged by security details from the police, central intelligence, the military and prisons.

Teachers unions have come in full support of Mutsiba.

“We see nothing wrong in learners’ expression of their concerns. They are very genuine. They need to be listened to.

“As for the teacher who is said to have instigated the demonstration, Zimta is still making its investigation before it can comment,” said Zimbabwe Teachers Association (Zimta) secretary general Tapson Sibanda.