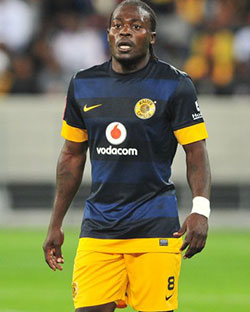 KAISER Chiefs players have come out in full support of striker Kingston Nkhatha and spoke out against the growing booing culture in the stands this season.
Nkhatha was a victim of negative chants from the club’s own fans during the Soweto derby clash against Orlando Pirates on Saturday.
The Zimbabwe international responded with the goal that tied the match and win Chiefs a point against his arch-rivals and still did not win favour with the club’s supporters on the day.
Captain Itumeleng Khune blasted the attitude from the fans as going against the team’s efforts on the pitch this season.
“The booing continued even after we had made an appeal before the Derby that the supporters must stop this,” Khune told the club’s website.
“The booing is not right. This conduct is not acceptable at all. As the Team captain I should be focusing on rallying the players to push for a win but now I end up channelling the energy towards brokering peace between the players and the supporters.
“We will stick together as a Team and together with the supporters who are not involved in this act; we will hold hands to encourage the boo-brigade to do the right thing. We are concerned that this act will derail our intentions to defend the Championship and win other trophies for the supporters.”
For striker Bernard Parker it was a lot more personal, as he too endured negative acts from fans when his form dipped.
“It happened to me two years ago,” Parker recalled. “When it happened to my striking partner last Saturday, I went to him (Kingston) and encouraged him to hold his head high and focus on the game.
“I am just appealing to the fans to do the right thing. I cannot understand why they boo the player at the beginning of the game and while the game is still on, that baffles me.”
Meanwhile, defenders Morgan Gould and Tefu Mashamaite did not mince their words, painting a picture that Amakhosi fans should be ashamed of.
“I don’t have words to express my disappointment,” Gould said. “We are a family at Chiefs; we are supposed to stand together during the highs and lows of the team.
“How do we give the best performance if the fans boo us? The fans must support us in the right way. Imagine if it were your father or sister being booed like that? How will you produce results under those circumstances?”Advertisement

Mashamaite added: “It is violent behaviour. It is people who expect things to go their way at all times. The supporters must exercise patience; it is virtue to do so.
“I can’t give advice on this one, safe to say, the supporters know very well what to do. At the end of the day it is their decision how they behave at the stadium.”