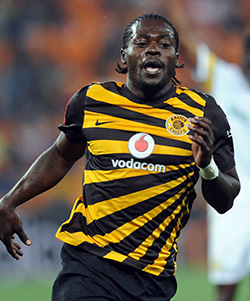 ZIMBABWE international Kingston Nkhatha starred in Kaizer Chiefs 2-1 win over struggling Free State Stars Tuesday, winning the man-of-the-match award in a perfect response to supporters who had barracked him over his recent performances.
Coach Stuart Baxter was not impressed as Nkhatha was heckled by Chief’s supporters when the unbeaten Amakhosi laboured to a 1-0 win over Chippa United at the weekend.
But the player repaid his coach’s faith Tuesday evening as Chief’s extended their unbeaten run to 17 games and their lead at to the top of the ABSA premiership to 16 points.
Nkhata scored the opener before setting up Siyabonga Nkosi for his side’s second goal at Peter Mokaba Stadium.
Free State Stars, who are second from the bottom on the table, reduced the deficit late on through an own-goal from Bafana Bafana defender Mulomowandau Mathoho.
After the game, the Zimbabwean however, downplayed his impressive individual showing, crediting the victory to the whole team.
“It was a team effort,” he said.
“We are always encouraging each other to keep pushing no matter what anyone says. This [man of the match award] belongs to everyone at Chiefs.”
He added: “At training we keep pushing each other. It’s not just about me, it’s about everyone that plays for Chiefs.”

Baxter commended the team camaraderie and was particularly impressed with his under-fire striker.
He said: “Their character showed itself in periods of the game when it was raining and they [Stars] were launching anything into the box.
“It’s that sort of camaraderie that rides out the storm.
“I work with Kingston all the time, and it was nice to see him go to his teammates after scoring and his teammates feeling for him.”
The Briton added: “It was a tricky game well-negotiated and a very welcome three points.”
Tuesday Results: Ajax Cape Town 1-1 Amazulu, Maritzburg 1-2 Mamelodi Sundowns, Kaizer Chiefs 2-1 Free State Stars, Polokwane City 1-5 University of Pretoria