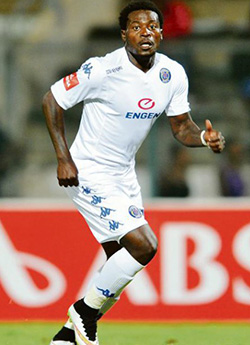 SUPERSPORT United striker Kingston Nkhatha says the team have already set their sights on going all the way to the Nedbank Cup Final.
Matsatsantsa host Golden Arrows ‘at home’ at the Peter Mokaba Stadium on Saturday evening in the quarter-finals of the event.
“SuperSport have that thing of winning cups, so I think everyone is already focused on going through to the Final,” says Nkhatha, whose side lifted the Telkom Knockout in November last year.
“With the way we are playing now, I don’t see anything that is going to stop us. But we also need to do it [the talking] on the field.”
Meanwhile, Nkhatha has credited God and his teammates with his remarkable record of having yet to endure defeat in any domestic game he has played this season.
The Zimbabwe international has featured in 28 matches in all competitions this term, six with SuperSport and 22 with former club Kaizer Chiefs.
Nkhatha was, however, on the losing side when Amakhosi were eliminated in the Telkom Knockout quarter-finals on penalties by Platinum Stars following a goalless 120 minutes.
“Credit to God, He’s the one that’s doing things to me, and also my teammates are helping me whenever we play, making sure I give 100 percent effort all the time,” Nkhatha concludes.