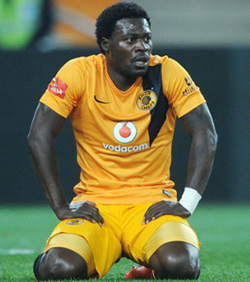 KINGSTON Nkhatha has hit out at claims he was one of Kaizer Chiefs’ “worst strikers” following his move to SuperSport United in January.
The Zimbabwe international departed the Glamour Boys during the recently concluded transfer period after being deemed surplus to requirements at the Soweto giants.
The forward, whose initial pre-agreement with Matsatsantsa was pushed through with immediate effect at the beginning of January, came under plenty of criticism during his time at Chiefs, with fans suggesting he lacked the quality to wear the famous gold and black strip.
Nkhatha, though, believes he played a key role for the club, scoring “important goals” which helped them to their current 15-point lead at the top of the Premiership standings.
“I think I played my part and I helped the team in many games,” Nkhatha told Soccer Laduma.
“I scored some important goals for the team and won games for the team as well, so no, I wasn’t the worst striker at Chiefs during my time.”
Witbank Spurs snap up Moyo

NATIONAL First Division club Witbank Spurs have signed Zimbabwe international Peter ‘Rio’ Moyo, pending the issuing of his work permit.
Moyo was initially signed by Mpumalanga Black Aces in June last year, but the deal was then terminated under unclear circumstances leading to his move to Spurs.
Spurs have now confirmed that the 26-year-old, who impressed during the African Nations Championships last year, will join once his papers have been finalised, having made a good impression while training with the club late last year.
The NFD outfit has already filed the midfielder’s papers with the League and are now merely awaiting the issuing of his work permit before he becomes eligible for selection.
Witbank Spurs currently sit 12th in the NFD standings with 18 points from 16 matches, and take on Cape Town all stars in their first League encounter of the year, scheduled for Wednesday, 11 February.Advertisement