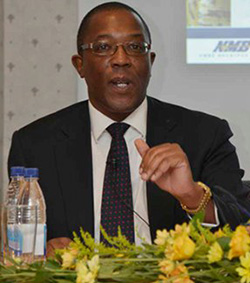 NMB Bank Holdings chief executive, James Mushore, has stepped down from the local financial institution he helped found due to ill health, the group said on Monday.
Mushore served as group chief executive since he re-joined NMBZ in 2010. Managing director of the group’s flagship banking unit, Benefit Washaya, will serve as acting chief executive with effect from November 1.
“The board of directors of NMBZ Holdings Limited announces with regret that Mr. James A Mushore will step down as chief executive officer and director of NMBZ Holdings and NMB Bank due to ill health, effective October 31, 2014,” said company secretary Violet Mutandwa in a statement.
Mushore was conspicuous by his absence at the group’s annual general meeting last month, raising speculation that he could have thrown in the towel. At the time, no formal communication was given for his absence.
The meeting was one of the most protracted AGMs in recent times after shareholders opted for a poll on resolutions which saw chairman, Tendai Mundawarara, opting to step down at the end of the year despite being re-elected.
In the half year to June 2014, the group recorded an attributable profit of $1,4 million from an attributable loss of $3,4 million for the year ending December 31, 2013.
But the bank has a non-performing loan ratio of 20 percent, and has targeted to reduce it to 15 percent by year-end.
At the AGM, Washaya told shareholders that the performance of the group to August 31 was below budget due to a dip in interest margins and slowdown in economic activity that has resulted in liquidity constraints.
Mushore, along with Julius Makoni and William Nyemba formed the then National Merchant Bank of Zimbabwe as the first wholly Zimbabwean merchant bank in 1993. Makoni served as the group chief executive with Zimuto as deputy while Mushore served as deputy managing director of NMB Bank.
In 2004, Mushore, along with Makoni, Zimuto and another NMB executive, Otto Chekeche fled Zimbabwe after they were accused of flouting exchange control regulations to siphon about $8 million out of Zimbabwe through a money transfer agency they had set up in London.
The courts eventually cleared the executives of personal liability in the alleged exchange control violations.
Mushore was appointed the group chief executive in April 2010 after he returned to the country.Advertisement