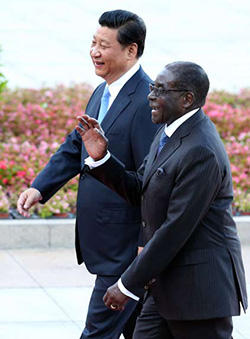 PRESIDENT Robert Mugabe leaves China on Thursday without the unconditional support he had sought from Beijing to keep Zimbabwe’s struggling economy afloat, a sign China is not willing to commit cash blindly, even to its closest allies in Africa.
The 90-year-old president has been one of Beijing’s staunchest allies in Africa, dating from his days as a Maoist revolutionary fighting to overturn minority rule by whites. He was met with full honours in Beijing on Monday by Chinese President Xi Jinping, just weeks after US President Barack Obama refused to include him in an African summit in Washington.
In recent years perceptions have grown in the west that China builds ties and reaps economic rewards in Africa and elsewhere in the developing world through no-strings-attached deals. But Beijing’s relatively hard-nosed reception of Mugabe shows that its open-wallet policy has limits.
Mugabe, one of Africa’s longest-serving leaders, was hoping for a $10bn financial bailout package, with an initial tranche of $4bn as sanctions cut off his ability to tap western loans, according to Zimbabwean media.
Instead, he obtained a $2bn deal for the future construction of a coal mine, power station and dam. For this infrastructure deal, Chinese loan payments had to be secured against future Zimbabwean mining tax revenues.
On top of this, Zimbabwe received a token agreement to conduct feasibility studies for other telecoms and infrastructure projects, $8m in donated rice and a $24m grant to build schools and clinics.
For the feasibility studies, he had to commit to set aside revenues from state-owned companies in order to obtain loans from China’s state-owned banks – a sign of the depth of Beijing’s unease over Zimbabwe’s economy.
The country’s economy has spiralled downwards during Mugabe’s rule, amid crippling sanctions, ethnic strife and forced expropriation of the white-owned farms that previously accounted for most of its food production. But economic activity recovered strongly between 2009 and 2013, following a 10-year hyperinflationary economic meltdown.
The mooted infrastructure projects will probably boost growth after the 2018 elections, but that leaves Mugabe’s government to negotiate four very difficult years, especially if the debt burden is left to fester.Advertisement

Even if they bear fruit, the projects are unlikely to alleviate the country’s near-term liquidity, debt and balance-of-payments problems. Some analysts fear they could even exacerbate them, especially if the conditions eventually agreed with Chinese financiers failed to meet the IMF’s concessional loan criteria.
In a letter of intent to the IMF in July, Zimbabwe agreed to limit the amount of offshore non-concessional borrowing. Failure to meet IMF criteria would further postpone the debt-restructuring agreement with international creditors that Zimbabwe needs.
High quality global journalism requires investment. Please share this article with others using the link below, do not cut & paste the article.
Bankers and economists warned that “securitisation” of uncertain income flows from future mineral earnings is a high-risk as well as a high-cost strategy. On top of this, analysts fear the gross domestic product, well beyond the 120 per cent level the IMF is already projecting for 2018.
China has followed a similarly cautious strategy with other political allies with shaky economies, for instance securing loans to Venezuela and Ecuador against those countries’ oil exports. Earlier this year, the west African country of Ghana said it was not tapping a loan from China after three years of negotiations over the terms.
In the case of Zimbabwe, Beijing is particularly concerned that its money be used for the intended purpose after previous loans went astray, said Zhang Chun, deputy director for West Asia and Africa Studies at the Shanghai Institute for International Studies.
This article was originally published by the Financial Times