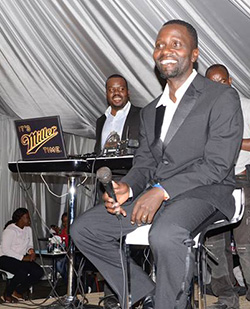 IBUMBA International Festival will not accept sponsorship from corporates that are pushing a certain agenda, which is against the founding values of the arts fiesta, organisers said this week.
Speaking at the official opening of the 16th edition of the festival at Stanley Hall in Makokoba, Bulawayo, on Tuesday, festival director Saimon Mambazo Phiri, said they continue to face pressure from corporates to relocate the festival to a more convenient venue.
He also revealed that they have rejected funding that comes with conditions.
Notable guests who attended the launch included principal director in the ministry of Sport, Arts and Culture, Reverend Paul Damasane, Ward 7 Councillor James Sithole and other stakeholders in the arts industry.
The festival, which kicked off Tuesday, runs until 22 December, under the theme, No Limits.
“This is a festival with ethos; even within our festival team we have fought a lot of times on why are we keeping the festival in Makokoba,” said Phiri.
“We are losing quite a lot of potential funders because we refuse to get away from Makokoba as we have always said that Makokoba is our permanent backdrop.
“Some of us who have the experience to travel the world, you go to Spain and the best destinations in this world, the festivals are held at the backyards of where these people live. We want to grow going to where the people are.”
He said they would not be swayed by corporates who offer them large sums of money in order to use the festival to distribute their products.
“The major reason why we do not get money, is that we do not fit in their criteria, we do not tick quite a lot of boxes,” said Phiri.
“We do not want to distribute to people when they come through the door because we do not think everyone in Makokoba should use a condom all the time or we should be distributing condoms to kids. All these things make enemies for us.”
The festival has been plagued by financial challenges in the past few years. In 2012 it was cancelled as the organisers failed to raise enough money.
The seven-day arts jamboree, will see over hundred artists from different parts of the country showcase their talents in more than 50 productions.
This year, the festival has grown bigger with the inclusion of more arts genres and venues. For the first time, the festival will host a gospel concert featuring some of the best gospel acts from the city. Advertisement

A football tournament will also run concurrently with the festival, featuring semi-professional football teams from Bulawayo.