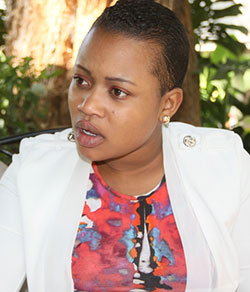 IF Makanaka Wakatama is under the illusion that the nation will have collective amnesia and conveniently forget the events of less than a decade ago, then she has lost the plot. For she did not get the sympathy that she must have sought last week when she addressed the nation, in a self-pitying letter in which she portrayed herself as a victim of an early marriage.
Instead, she got more than she had bargained for. She was labelled all sorts of names, some of which are unprintable (in a family publication). The debate was not even balanced nor divided, most of the reactions, from either men or women, were unanimous: you made your bed, now sleep in it.
For the benefit of those too young to know who Makanaka is, or those who might have all but forgotten that she still existed, here is a bit of background info. Makanaka, alongside Tinevimbo Chimbetete, became child stars as presenters of Star Kidz, a very popular segment for kids on ZTV back in the day.
The popularity of the programme was such that almost every company wanted to have its logo on any of the programmes that the duo presented. Hence Alcatraz (then the fashion house of Harare), owned by the Sambazi brothers, ended up dressing up the young presenters. As the years went by, Makanaka grew into an adorable little girl and before anyone realised it, she was off the screens.
It started off as a rumour but soon became fact, Makanaka had forced her way into someone’s marriage. Obvious, one of the two Alcatraz brothers who must have been twice her age and married, had taken her as a second wife. Makanaka was 15 then.
Her insinuations today that she was a ‘victim of an early marriage’ makes a mockery of us who saw it all happening before our eyes. Probably she thinks we are a stupid nation. Everyone made an effort to help her out of the situation, from the media, her father and even Betty Makoni. Poor Betty Makoni. Poor, because some thought she wanted to gain financial mileage out of Makanaka’s case.
But Makanaka and her mother would have none of the “nonsense”, and in any case Makanaka never wanted any help. They were resolute and they made everyone who tried to help them look like fools.
Typical of her shameless manner, she turns around today and claims that she was a victim of that marriage. Really? Now that she has been about town and discovered that Harare is seamless, that in fact she is the one with a seam, and probably a little bit broke too, she is now playing the victim card.Advertisement

Fine, there is money to be made in the NGO world, but if she is going to seek that kind of money, let it be clean money. She must not get it on the altar of lies. Back then she took the nation for a ride and she cannot, and will not, fool us again.
Makanaka came from a family of means, went to a good school and had several opportunities ahead of her, given the fame that television gave her. She, instead, chose marriage. Rather someone’s husband.
After the breakdown of that marriage, word has it that she went on to become Wife No. 2 again somewhere, and again somewhere. Honestly she was not forced in all those instances. They were options that were available to her.
Makanaka’s case is quite different, and should not be confused with girls in those sects who are married off, either for religious beliefs or as an escape from poverty.
In her case, there were no beliefs to be taken care of, in fact she and her mother believed that it could be a path to riches; which at one time it proved to be as she was handed a clothing shop as a golden handshake.
Her marriage at 15 was not to escape from poverty, so she must not confuse us by playing the victim. A victim of what? If she was, indeed, a victim she must have been a victim of her lack of judgment and her thirst for material things. Rather, a marriage at 15 was a dash into riches.
What moral values will she impart to our children if she is allowed to run that trust? What lessons will our children draw from her, if we allow her to proceed with her project? Because as it stands, she is no longer the role model she was, she has no moral standing to speak about being a victim.
The picture that the nation has of Makanaka is of a misguided and greedy girl, who could not handle her fame, and instead, used that fame to wreck different marriages.
Having succeeded and failed in her mission, she now wants our sympathy. That she was young and impressionable; that she was a victim.
We would rather have a girl from Hurungwe, from within any of those sects, speaking to us about forced marriages. Not Makanaka. We would rather have a girl from a poverty-stricken family, speaking and starting such a trust, and not Makanaka.
We have not forgotten how Makanaka made all of us look: silly and useless. The person who must be starting a trust, instead, must be the husband. Or the wife who was deposed.
The husband’s trust would be on alerting rich men on life’s dangers, that there are girls who are so cunning that they will leave you broke. (The clothing shop chain is no longer visible in Harare.)
The deposed wife’s trust would be to inform other women on the dangers and pitfalls of being married to rich men.
Yes, those are the trusts that we MAY accept into our society, not Makanaka’s. She can try it but our collective hope is that she should not, and will not, succeed in fooling us twice.
This article was originally published by the Sunday Mail