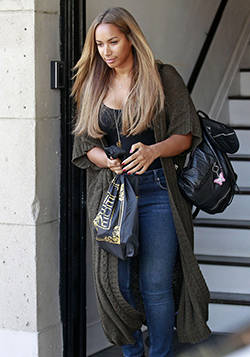 LEONA Lewis has revealed there’s no holding back for her and her music, after leaving Simon Cowell’s record label.
The former UK X Factor winner, who is now with Island Records, claimed she felt “taken advantage of” when she was signed to Simon’s Syco company.
In a video posted on Twitter, showing her in the studio, she said she prefers her new musical home.
“It’s like full circle, back to where I started, and why I started doing music. Having that creative freedom, I’m going out there and doing my own thing,” she said.
Appearing to take a swipe at her former label, she continued: “A lot of people were telling me how to be and how to act, and what to say.
“You should be able to do whatever you want to do and express yourself. No one is one-dimensional.”
“I’m going to say whatever it is I want to say and I’m not going to compromise myself any more. I’m not going to censor myself,” she added.
Leona, who won the ITV show in 2006, also shared a brief clip of her new track Fire.
The 30-year-old singer, who had hits with Bleeding Love and A Moment Like This, announced her split from Simon’s Syco label and a new deal with Universal’s Island Records in September.
She wrote an open letter to her fans about her decision, which she shared on Instagram.
“At some points I felt extremely depressed and other times experienced amazing highs, but it got to a place where the downs were outweighing the ups,” she wrote.
“After several years, I thought about leaving over and over again. One day, everything changed.”
Leona added: “For my fifth album, I was asked to make a record that would not have been true to myself.
“By all means as an artist in this climate, I was thankful to even get the chance to make another record.
“But I cannot make music that does not speak to my soul, and as scary as it seemed, I could no longer compromise myself, and so I decided to leave.”Advertisement