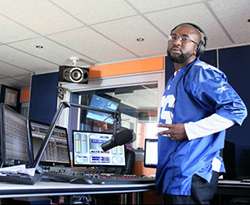 PROMINENT radio personality, Munyaradzi Milimo aka disc-jockey Munya, accused of murdering a man he suspected to have had a relationship with his wife will have to wait a bit longer for his trial to begin.
Milimo, 32, Taurai Janhi, 34, and Mohammed Matare, 31, are charged with kidnapping and murder and will again be in court on January 7 despite protests of unconstitutionality by their legal counsel Lucky Mauwa.
Maunwa argued Tuesday before magistrate Tendai Mahwe that his clients had been promised a trial date failure of which they would be removed from remand when they earlier appeared before another magistrate Milton Serima.
“Magistrate Milton Serima promised that the accused would be removed from remand considering the time they have been on remand if the state was unable to provide a trial date.
“The accused must be removed from remand and there will not be any prejudice for the State or the accused,” Mauwa said.
He added that at the accused last court appearance, the presiding magistrate had promised to remove them from remand if a trial date was not provided.
However, prosecutor Sharon Mashavira said the trio’s record was still with the Prosecutor General’s (PG) office, adding: “The state had not made arrangements with the PG’s office to have the court records and the holidays have complicated things for us.”
Mauwa’s previous applications to have his clients removed from remand have also hit a brick wall, after being dismissed by Serima.
It is the state case that, the now deceased Tinashe Magorimbo was murdered sometime in May last year, after failing to pay DJ Munya $4,000 compensation for having an illicit affair with his wife.
Magorimbo allegedly paid Mililo $1,000 in February, 2013 through Janhi and Matare as part payment of the $5,000 settlement the two had agreed on.
It is the state case that Mililo allegedly enlisted the services of Janhi and Matare to force Magorimbo to settle their agreement after the deceased had become evasive over the outstanding payment.
In May 2013, Magorimbo disappeared and Henry Mandishona, one of his superiors at work, allegedly received a text message demanding $5,000 for the safe return of the deceased.
That same day Mililo allegedly went to Magorimbo’s place of residence and assured the wife that her husband would soon come back home and that she must not panic.Advertisement

The following day Magorimbo showed up at home naked and struggling to walk while his hands were allegedly tied.
Magorimbo was rushed to hospital where he was diagnosed with poisoning and died on the same day. Dj Munya and his co-accused are out of custody on $300 bail each. They deny the charges