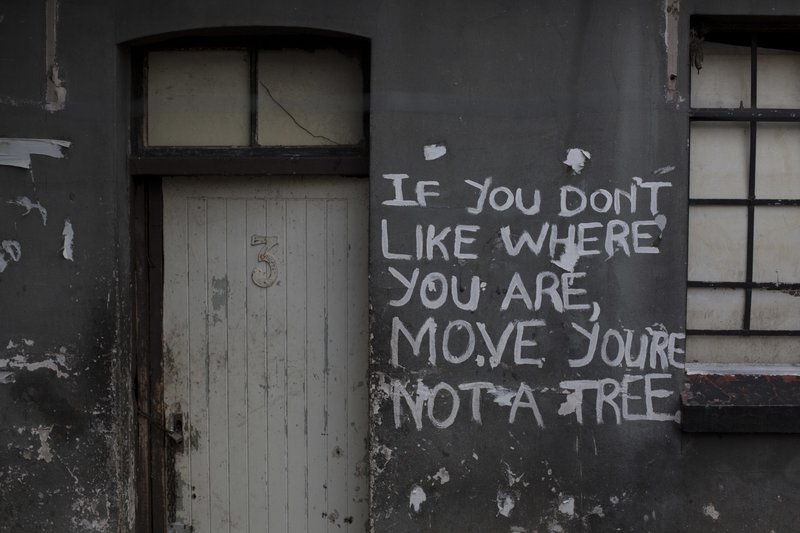 JOHANNESBURG: A rat pauses on the puddled floor before disappearing under a bed. Somewhere in the large and crowded tent a baby, born three days ago, cries. Outside, women gather around a fire that serves as their stove and, as shadows lengthen, their warmth for the night.

“This is my home,” 37-year-old Alisa Jozana says, spreading her arms and smiling ironically. Home is the narrow couch she sits on. She says she’s been here since July. “No one cares about us. No one.”

This collection of tents on the edge of a sports field is what the city of Johannesburg considers appropriate alternative housing while something more permanent is arranged. The tents hold more than 200 people evicted from inner-city buildings that authorities say have been “hijacked” by squatters.

Tens of thousands more people, by some estimates as many as 100,000, are living in hundreds of abandoned buildings across downtown Johannesburg, one of Africa’s wealthiest cities but also one of the world’s most unequal, according to the World Bank. The mayor wants the squatters cleared out to make way for an urban revival, with proposals to expropriate buildings and turn them over to private developers.

“The city can confirm 432 buildings as hijacked as of March,” a spokesman for the mayor’s office, Omogolo Taunyane, said in an email to The Associated Press. The mayor is committed to finding solutions to “bring dignity back to our poorest residents,” Taunyane said.

The abandoned buildings make an often dangerous home. Last month, three children were killed when a wall collapsed on them in the building their families shared with about 300 people. For eight months the residents had asked city officials for emergency housing, knowing conditions were not safe. The city failed them, their lawyers said.

Some of Johannesburg’s decaying blocks have been turned into upscale venues with art galleries and coffee shops, the first steps to restoring vibrancy to the city’s downtown that many fled in the waning years of apartheid, or white minority rule, which ended in the early 1990s.

But Mayor Herman Mashaba has alarmed residents of South Africa’s largest city of more than 4.4 million people by accusing migrants from other countries for making up the majority of squatters, contributing to the xenophobia that periodically flares into violent attacks. Foreigners “are not the responsibility of the city,” he said last year.

This “extremely unfortunate rhetoric” is what sets the current eviction plans apart from those of previous administrations, said Stuart Wilson, executive director of the Socio-Economic Rights Institute of South Africa. The organization represents people in up to 20 buildings across the city and about 80 percent of them are South African, he said.

On visits to “hijacked” buildings by the AP, residents said they are disgusted by their living conditions. Some work as security guards, domestic workers and small traders in neighborhoods nearby. Others are unemployed, hustle or turn to crime. They want to see redevelopment that would give them a proper home, not force them to leave.

That plan has run into trouble after a Constitutional Court ruling last year emphasized the obvious: The city cannot evict people without offering proper alternatives — even if they consent to go.

“The city’s plans are to provide a mere 364 new beds in temporary accommodation this year. That is a tiny fraction of what is required,” the socio-economic rights group said after the deadly wall collapse. The state has the money and land and should provide housing at affordable prices, the group’s executive director added, calling the city “not particularly keen” on public housing.

The previous administration said 16,000 housing units were needed for the inner city’s “most vulnerable” residents alone, according to a report it released with U.N.-Habitat in 2016. The current administration says overall it faces a housing backlog of 300,000 units.

For now, tens of thousands of squatters, and others who say they pay nominal rents, are left in a filthy limbo without basic services and at the mercy of Johannesburg’s high rate of crime.

In one building the AP visited in the Berea neighborhood, residents pleaded for assistance. A toilet on the first floor overflowed with feces, the room beyond it flooded with gray water. Behind a curtain, a woman lay on a bed in the shadows, a small child curled to her bare breasts. She was ill, said residents who walked in and out of the room with ease.

Shattered windows were stuffed with rags. There were no utilities. People use buckets for toilets and light candles at night despite being fearful of fires.

“There’s no life. We’re crying,” said 34-year-old Siphokazi Siyaya, a mother of three who said she has lived in the building for eight years with up to 200 other people. “Sometimes people are fighting, shooting in front of our children. We just want them to grow up safe.”